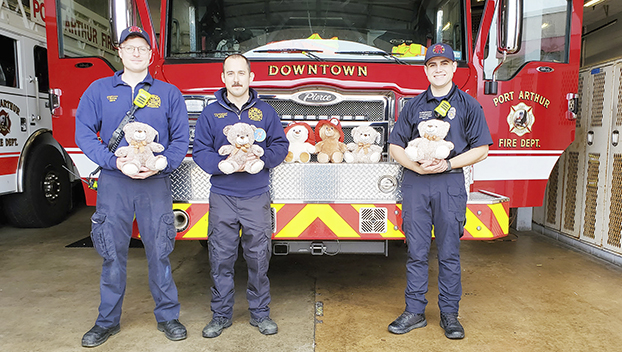 Port Arthur Fire Capt. Tyler Barbay, left, Capt. Dylan Tompkins and Probationary Firefighter Braydon Kiser hold some of the teddy bears that were donated to the department from Port Acres Public Action group. The bears will be given out to help calm children during a stressful event. (Mary Meaux/The News)

Greg Benson remembers a time years ago when a teddy bear helped calm a small child after a wreck put him and his mother in an ambulance.

He called it a phenomenal thing.

The child’s mother was injured but the child wasn’t hurt. First responders needed to take the woman to the hospital, so the child, who was about 3 years of age, was placed in the back of the ambulance and strapped in for the ride.

Then the child was given a teddy bear to calm his fears.

He got to the hospital, walking in holding the teddy bear and informed those around that it was his friend.

“He had already named the teddy bear and was hugging him,” Port Arthur Fire Chief Greg Benson said, adding it made a huge difference in the situation. “It was really a positive thing, and the outcome was good.”

The fire department and police department were the recent recipients of a donation of teddy bears courtesy of the Port Acres Public Action group.

And while Benson’s experience was in a different location, he knows it is beneficial and will be used.

“People may ask why do you need teddy bears?” he said. “You’d be surprised. If you’re involved directly or indirectly with something, how a teddy bear can make a big difference to them while adjusting to their mental state.”

Chuck Vincent, a member of the PAPA group, said he has been with police during calls involving children that were injured and scared. He spoke with an officer and asked what the group could do to help.

The answer was teddy bears. He took the information back to the group, which decided to take it on as a project.

Then one of the members got a call from a firefighter at the Port Acres area station about teddy bears. It was decided to collect the bears and donate to the police and fire departments. They held a fundraiser outside Walmart on Memorial Boulevard one Saturday with the goal of getting 300 bears and got 400. They also received donations from other Port Acres community members.

Vincent said they calculated the amount of bears to be able to have two bears per police and fire vehicles so there would be enough at a scene to give to multiple children.

“PAPA’s gracious donation indicates how tight the community is with everyone seeing to support each other in times of trauma and stress,” Benson said. “The commitment of both Port Arthur fire and police to provide public safety services to the community is enhanced by adding these teddy bears donated by PAPA.”