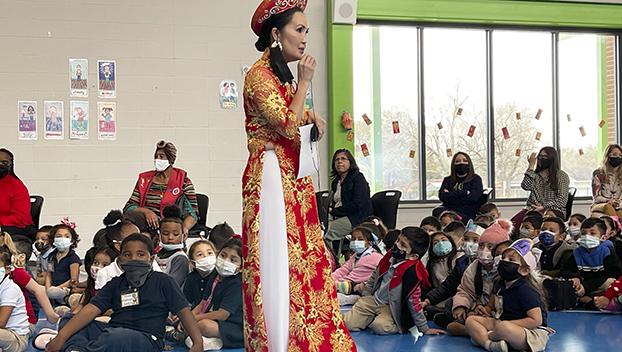 My paternal grandparents were the textbook definition of Cajun French.

While I built my byline on the name Monique Batson, I was born La’Tesha Monique Quibodeaux. My name was as French as could be, down to having all five vowels and an “x” in my last name alone.
I was in second grade before I learned how to spell it.

But, as the first in my family to be born in Texas, the culture and history were fascinating to me.

They believed no meal was complete without rice and gravy.

Gumbo contained nothing but roux, chicken, sausage, and whole boiled eggs. There were no vegetables added for flavor, nothing green floating around. It wasn’t needed. But no one was about to eat it until they added a hefty amount of Tabasco sauce to their bowl.

When we gathered together for holidays, my grandfather would load his record player with Zydeco music on vinyl he’d kept for decades.

And more than not, they spoke to each other in Cajun French.

Married for 60 years before my grandmother died, they almost didn’t need to speak at all. But when they used English, it was always with the heavy Cajun accent every Southeast Texan recognizes instantly.

But for the most part, they spoke in a language we couldn’t understand. Whether it was intentional or habit, I’ll never know.

They had moved to Texas when my biological father was young, and he never learned the language. Therefore, I didn’t either.

It was quite obvious when my grandparents were talking about me as Monique translates exactly the same in both languages. Yet they would never tell us what they were saying, as their conversations were as sacred as dangerous.

A former co-worker of mine once wrote a story centered in Port Arthur that talked about how the Vietnamese language was — locally — on the brink of death.

While intentional, it was never supposed to be malicious.

Immigrants struggled so hard with their lack of knowing the English language that they focused on ensuring their kids knew English first. To many of them, speaking their native language was what held them back or led to a deep struggle. So they worked to ensure their children had a different experience.

Yet in the process, foreign languages began to die within their own communities. Rituals and culture began to fade, with few left to help teach those who now want to embrace their heritage.

And that’s why, this week, I was fascinated to see the Vietnamese Eucharistic Youth Movement from Queen of Vietnam Catholic Church perform the traditional Lunar New Year lion dance for the students of Houston Elementary School. Had you seen me clapping and smiling, you might have mistaken me for one of the faculty members.

It was the first time the school held a Lunar New Year assembly, Principal Marcia Sharp said. But it was done in an effort to ensure students were exposed to all of the cultures in Southeast Texas.

In addition to the lion dancers, teachers gave a presentation on the Lunar New Year traditions, explained the meaning, and joined students in a fashion show.

And as someone who missed out on learning about my own culture, seeing the children light up and dance along to something some had never experienced was heartwarming.

Gone are the days of being afraid of where we came from. We need to teach our children all of the traditions our ancestors celebrated. And — if you’re like me — learn together what you don’t know.

My Cajun grandmother was also Catholic. And while I wasn’t raised that way, watching her make rosaries and anoint doorways with Holy oil fascinated me. She had a room in her home dedicated to Catholicism — there was a folding prayer pew that my grandfather built her under shelves of statues of saints, candles, and other affiliated items.

Her foundation was everything to her.

I only wish I had spent more time learning everything it was built on before she passed.