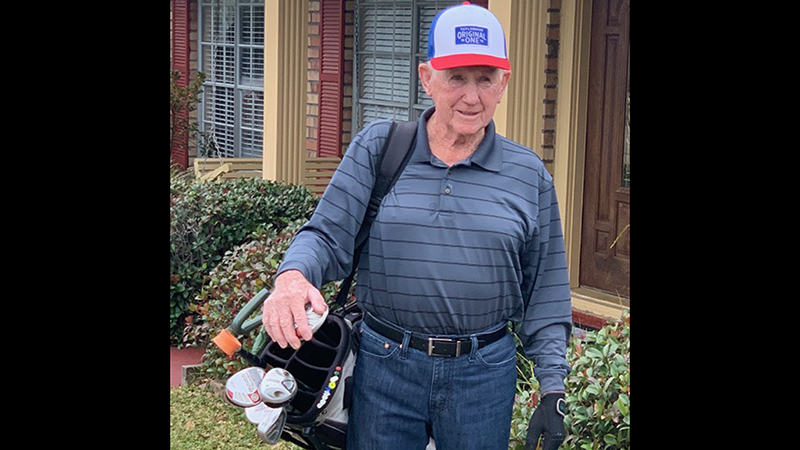 Paul Duplantis gets ready for a round of golf. (Courtesy Photo)

Noted Austin teaching pro Harvey Penick once wrote a book about golf titled, “The Game for a Lifetime.” He probably should have had a photo of Port Neches resident Paul Duplantis on the cover.

Duplantis, who celebrated his 94th birthday on New Year’s Day, tries to play twice a week at Babe Zaharias. You can’t miss him, either. In an era when nearly all golfers other than kids ride, he’s the odd duck walking and carrying his clubs.

A native of Abbyville, Louisiana, Duplantis moved to Port Arthur to take a job at Gulf Oil at age 23 in 1951. He’d work there until retiring in 1986, was introduced to golf in the early 1960s at Pleasure Island by his brother-in-law and the closest thing he ever had to a lesson was watching a Jack Nicklaus video.

You would never know Duplantis is in his 90s by watching him walk at a brisk enough pace to keep up with his playing partners in the Zaharias DogFight and 2-ball games. Nor could you sense it by testing his recall or listening to him talk.

“I’ve been blessed with good genes and good health,” he declares. “My dad was seven days short of 90 when he passed away. My mother died at 86. I had an aunt who lived to be 106. I was doing hard labor on a rice farm when I was 10. I was a pipefitter at Gulf and that involved long hours of manual labor. I have stayed fit all my life.”

Duplantis doesn’t labor to recall his best round — a 71 from the white tees at Zaharias nearly 17 years ago on July 15, 2005. It may have something to do with that day’s highlight – his first and only hole-in- one with an 8 iron from 150 yards on the 12th hole.

Those who play in the games he frequents at Zaharias marvel at why he walks when everybody else rides, with some speculating than he squeezes pennies. The real reason involves both health and a somewhat funny story he tells about a round at the Pea Patch.

“When I retired from the Gulf,” he confides, “I had a bad knee. It bothered me to the point I had to keep it wrapped. So, I started riding with a guy named Leo Bacon. Leo was a little reckless, ran off into a ditch one day and I was thrown out of the cart.

“I thought to myself I’d be safer walking and started doing it again the next time I played. Within six weeks, I was able to take the wrap off my knee. The only time I ride at Zaharias is when there is a long distance from a green to the next tee box, like 13 to 14, or 18 to 1 or 7 to 8. In those situations, I try to hop on with somebody.”

As for why he carries his clubs, rather than use a pull cart, Duplantis said there is a simple explanation. He only employs five clubs – a driver, 3-wood, 5 wood, 8 iron (the same one he made the ace with in 1977) and a putter. And his bag is light as a feather.

“I do have two nice pull carts at home, but I’ve found carrying my clubs helps keep my back straight,” he said. “I don’t want to start slumping. And the five clubs are all I really need. I use that 5-wood anywhere from 75 to 150 yards.”

Like many of his younger golfing counterparts, Duplantis frets about two aspects of his game – putting and consistency. There have become too many days filled with three-putts and too many rounds with an 8-to-10 shot difference from one nine to the next.

All in all, though, the old guy who was born in the middle of the great depression would not trade 18 holes at the golf course for much of anything. To him, golf is indeed the game for a (extended) lifetime.”

CHIP SHOTS: Andrew Landry and Chris Stroud are both back in action on the PGA Tour this week, teeing it up in the AT&T Pebble Beach Pro-Am. Both are coming off missed cuts two weeks ago in the American Express.

In the Monday Senior 50 Plus 2 ball, there was a tie on the front between the team of Ted Freeman, Bob Byerly, Raymond Darbonne and Dan Chandler and the foursome of Kenny Robbins, Danny Robbins, Troy Touchet and Dan Flood. Both teams were minus 2.

Todd Dodge details what his role is in search…