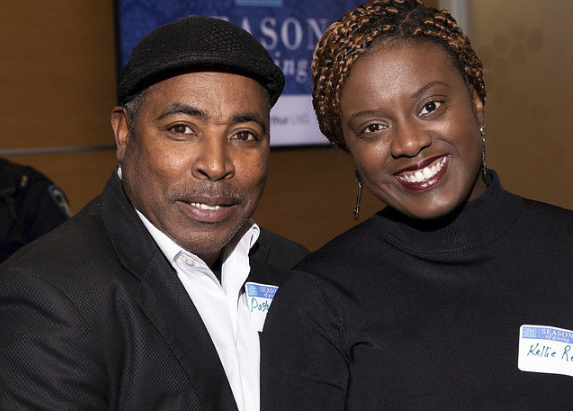 James Reed grew up in Port Arthur, but not in the best way.

“My husband…has always shared his life of being a bad kid,” said Kellie Reed. “He was doing a lot of things he shouldn’t have and made a lot of wrong choices, which landed him in jail many times. And he shared before how he met God in jail in 1987. And from that moment on, God gave him a second chance.”

James came back to Port Arthur to reach as many young men as possible to share his experience, help guide them away from violence and give them a safe place to find help.

From that, in 1998 Chosen Generation Evangelistic Ministries was formed.

The organization was one of 13 nonprofits awarded grants in late November during the inaugural Port Arthur News Season of Giving powered by Port Arthur LNG.

After beginning the ministry, James made it his mission to help the youth in the community — but it’s since grown exponentially.

“We do a lot of feeding families,” Kellie said. “We provided non-perishables, even milk and meats, to families on a monthly basis.”

In addition, the nonprofit collects coats and blankets for those experiencing homelessness, works to support current and former military members, hosts a holiday toy drive and in 2015 organized a Stop the Violence March in Port Arthur.

While they currently lease a building on DeQueen Boulevard, the Reeds are working towards building their own facility on the corner of Lewis Drive and Trinity Avenue.

“The property is paid for and it’s just ready to be built on,” Kellie said. “That’s our prayer and hope for this year.”

Efforts to construct the building are being made through various grant applications.

“We’re not the type of people that look for attention. We do a lot of things behind the scenes,” she added. “We’re just looking to get the building built.”

Once constructed, the center will serve in a multitude of areas. The food ministry will operate from there, and the couple is looking to host classes that include a G.E.D. program.

But the focus will remain on Port Arthur’s youth.

“A lot of young people don’t have that support in their homes,” Kelli said. “And we can see from the statistics of how violence has increased.”

This past weekend Port Arthur reported its third fatality of the year — all occurring within the first month of 2022.

Mayor Thurman Bartie told Port Arthur Newsmedia that the police are working to put a stop to the problem, but the city is plagued by illegal weapons.

Kellie said the hope for the future center will also provide a safe space for young people in Port Arthur.

“Our ministry has been that place where people can come if they need the support or need to be mentored,” she said. “Currently we are looking for grantors who will fund our vision of creating a space where young people can come and show them a positive light — a place to keep them focused and influenced.”