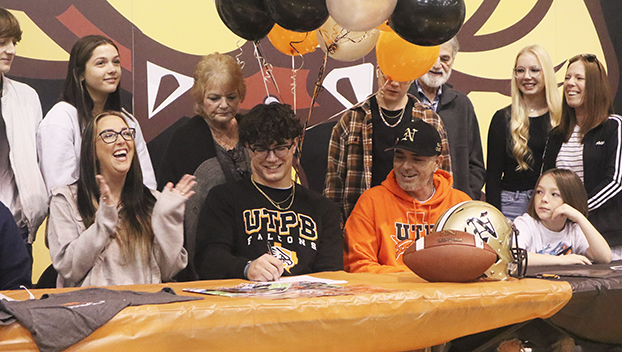 Nederland and Port Neches-Groves high schools celebrated along with athletes and programs across the nation for National Signing Day.

The ceremony for Beck was held in the Dog Dome as Beck put pen to paper.

“It feels amazing,” Beck said of signing. “I feel like UTPB is the right place for me. The coaches hit me up during my junior season. I finally got to go to the campus and it is amazing. It is so nice.”

Beck, who made the Texas 5A-Division II All-State second team in his junior year, said his favorite game of his time with the Bulldogs was the Mid County Madness win over rival PNG in 2021.

“It was great to finally beat them, especially in my senior year,” he said. “The whole game was nuts.”

“People will know, when Jaice Beck leaves that school, what Nederland is about,” Barrow said. “They are going to see what Jaice is about and everything he has done for this program and this school.” 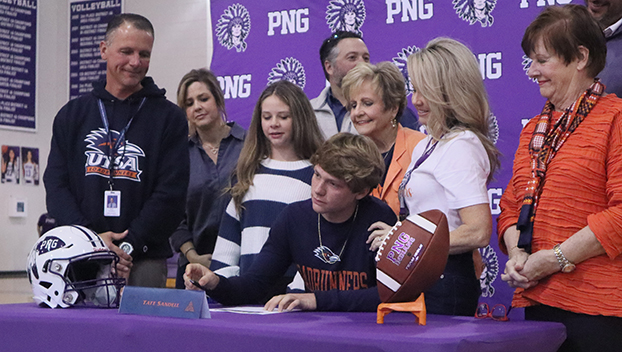 Sandell will graduate from PNG as the all-time record holder for PATs with 67. The week has been good to the place kicker. Sandell scored two goals for the soccer team Tuesday in a win over Nederland.

“It is a dream come true,” Sandell said of signing with UTSA. “This is the scenarios you dream of when you are younger. Now, getting to do it is great and I am ready to work.”

Sandell only started focusing seriously on being recruited over the past summer when he began attending camps.

“I realized I could finally make something of myself in the college recruiting world,” he said. “I went to some camps, started showcasing my talent and it started heating up from there.”

While the scholarship will be for Sandell to kick a football through the uprights, PNG soccer has also benefited from his leg strength during his time in high school.

Soccer Coach Chad Luttrull, who is an assistant coach for the football team, said Sandell is special.

“We are very happy to have him,” Luttrull said. “We are very proud of him. He has worked hard for it. He has spent a lot of time during the summers kicking. He has been up here on the turf after practice for four years. It is awesome as a coach to see a kid that works so hard get the recognition and the opportunity he deserves.”