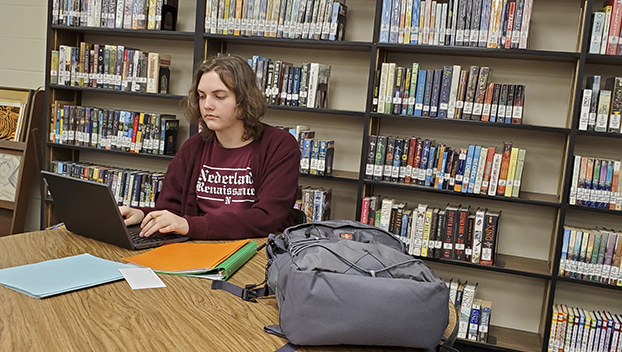 NEDERLAND — Drake Rothenberger’s future is tied to the past.

The senior at Nederland High School has a love for history and wants to earn a teaching degree and return to his high school, passing on the knowledge he’s learned.

But for Rothenberger, it’s about more than old dates and events.

Rothenberger moved to Nederland from another school district when he was in the eighth grade. His family experienced some hardships but Judy Lott, his C.O. Wilson Middle School history teacher, made a lasting impression.

“She didn’t care where I had come from. She didn’t judge me or anything,” Rothenberger said. “If I told her I couldn’t do an assignment because I didn’t have Internet, she’d let me do it in her classroom whenever I had time. Seeing what kind of effect she made, it really made me want to do the same thing.”

Rothenberger was “volunteered” to be part of the UIL Congressional Debate team by now retired educator Vicki Black.

“So I volunteered and I loved it,” he said, saying Black insisted he stay on the team when he worried it wouldn’t fit his schedule. “From that point on, that’s when I really started getting involved in school.”

The senior is now team captain and is responsible for training each debater individually and making sure they achieve the team’s goal, which is sending three members to state.

“We actually debated at the state capitol and the legislature was in session,” he said. “They actually televised it on a closed circuit to individual politicians’ rooms, so they got to see us debate live. It was really a great experience.”

Rothenberger is the second person in school history to advance to “Super Congress,” or state competition, he said.

The only other person was Samantha Healy, who is a student at the University of Texas. He said he was able to video chat with Healy, a person he looks up to, and is glad to follow in her footsteps.

Debate Sponsor Nathan Huckaby said Rothenberger exhibits strong character that fully embodies all of the academic traits high schools and colleges look for in a student.

“Drake is a constant voice of logic and reason in our Congressional Debate program and stands out clearly as a leader,” Huckaby said. “Drake has a work ethic that I have no doubt will allow him to succeed in any endeavor he seeks to conquer. In addition to his studies, Drake volunteers to help the school’s UIL events. Throughout these extraordinary efforts, Drake does not allow his grades and studying to fall behind.”

Rothenberger plans to attend Lamar University with goals of obtaining a masters and doctorate degrees. As for the doctorate, he will either go toward educational leadership in hopes to become a principal like his Great Uncle Rual Rothenberger, who was principal at Thomas Jefferson High School in Port Arthur years ago, or specialize in history and continue teaching at Nederland High School. 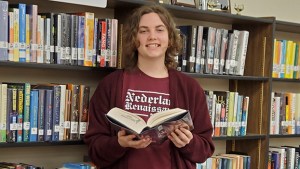 He is set to graduate this May and attend Lamar University with plans on becoming a history teacher. (Mary Meaux/The News)

When asked why he wants to one day teach at NHS, he said it’s because he loves the community and likes the way the district’s administration treats teachers.

District leaders care a lot more what students and teachers are saying and facilitating change, he said.

Other educators at the school feel strongly about the senior’s academic abilities.

Shirley De La Cruz, UIL Coordinator, said Rothenberger has been a great asset since he began in his freshman year. He has competed in Congressional Debate, Extemporaneous Speaking, Current Issues and Events, as well as a few others.

“He does not let any of life’s obstacles keep him from reaching his goals,” De La Cruz said. “Drake is an impressive and exemplary young man who has such a positive outlook on life and is driven to succeed in all he does. I am extremely proud of him.”

Jamie Evans, librarian and National Honor Society sponsor, likewise, is proud of Rothenberger. She said he is the student who pays attention to those around him and is always there when an extra hand is needed. Rothenberger, she said, is one of the hardest working and self-disciplined students she has ever known.

Rothenberger is in the top 9 percent of his class and has an overall grade point average of 3.925. He is a three-time competitor for University Interscholastic League State Congressional Debate, and is enrolled in all advanced placement courses.

In the future, he looks to give others the same opportunities he was given.

“I want to be able to make a difference in this community and tell people that just because you’re from Nederland, Port Arthur or Groves, that doesn’t mean that’s where you’ll end up,” he said. “You can do anything that you want to, you just have to try. And I also want to be able to help kids realize their potential.”