Port Arthur man tells Council realtor told him not to move here; he had other ideas 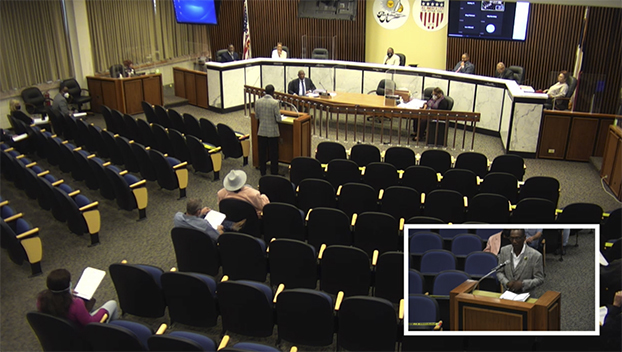 When James Thornton and his wife moved from Kentucky to Southeast Texas, they wanted to live in Port Arthur.

But their realtor continuously gave them reasons not to.

She cited the school district, crime and told the couple they would likely lose money if they tried to sell their home.

“There’s someone out there telling a different narrative of Port Arthur,” he said.

Thornton relocated when his wife, who works in the oil industry, took a job in the area.

“That’s not something most men would do but, I didn’t have a problem up and moving and letting her do what she does,” he said.

And they quickly settled into the Lake Arthur subdivision.

“Since we’ve been here, Port Arthur has some of the nicest people we’ve ever met,” he told councilmembers. “I was surprised hearing such things, because that was not our experience in Port Arthur.”

The man who develops businesses such as nightclubs and entertainment venues noted the potential for growth in the city, and even commented on the school buildings.

“You do have school systems, and you have a school that looks better than any school in a 100-mile radius,” he said. “Port Arthur has one of the best looking high schools and middle schools I’ve ever seen.”

But the story, he stressed, has to be told from those that believe in the city and not by those that don’t. Thornton never named the realtor whom he spoke of, but instead shared his hope for the area.

But the most important thing, he added, was for the residents of Port Arthur to share the message, as well.

And it was a message met warmly by the council.

“That you for that inspiring speech about Port Arthur,” Councilwoman Charlotte Moses said. “It certainly ignited me as you were speaking. I felt it as you started saying we are the best…and we are. We just have to speak that into existence.”

Councilman Thomas Kinlaw and Mayor Thurman Bartie also voiced their appreciation and enthusiasm about sharing positive news from the city.

“You all took a chance moving to Port Arthur, and I’m so glad your experience has been what it has been,” Councilwoman Ingrid Holmes said. “We appreciate you and your wife for coming to our city of Port Arthur and finding it is all the things we say it is.”