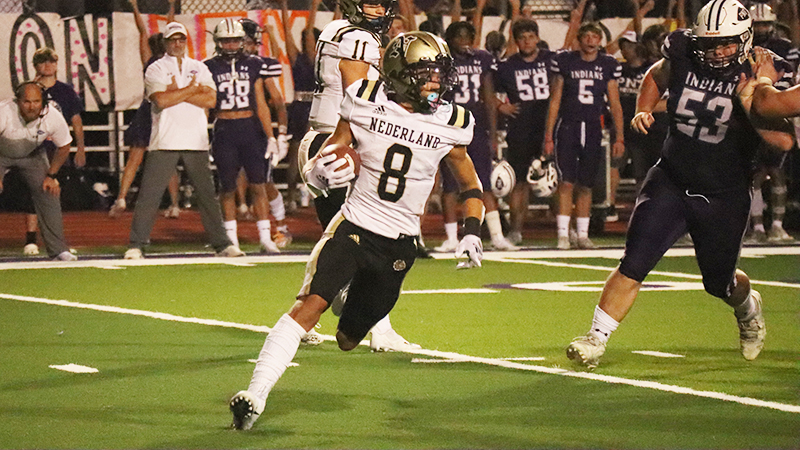 After his electric junior season in 2020 where he made the 5A- Division II All-State honorable mention as a defensive back and receiver, Kyndon Fuselier seems an obvious choice for a full-ride scholarship into a college program.

However, a combination of factors led to Fuselier, who Nederland Head Coach Monte Barrow calls the best player he has coached, to be without a scholarship offer on National Signing Day during his senior year.

“I’ve just been applying for scholarships and sending my film out to different colleges,” Fuselier said. “I’ve just been be trying to get any sort of attention from colleges I can get really.”

Fuselier has had productive talks with different colleges, but none have offered a scholarship to the two-way player. Many colleges have less of a need for incoming freshmen as programs use the transfer portal to nab potential players. Athletic programs are also still full with players who took a year off in 2020 because of the pandemic.

The NCAA allowed those players to sit out a year with no consequence, pushing incoming freshmen and potential recruits further down the depth chart.

For example, if a football team was made up of 70 percent seniors in 2020, college coaches likely recruited to fill that upcoming void by offering scholarships. Many of those players sat out the COVID year and earned another year of eligibility.

That team then had an influx of returners and scholarship offers. The program likely still offered the top players scholarships and pulled the remaining, causing a trickle-down effect for other programs.

Bad luck also hurt Fuselier’s scholarship hopes. The Bulldogs star student-athlete was one of the few holdovers from last year’s Nederland squad that graduated most of its starters. Coaches tried to find innovative ways to get him the ball, but extra attention from defenses put his senior season totals bellow numbers he put up in his junior year.

McNeese State had offered Fuselier a scholarship until Frank Wilson, who was the Cowboys head coach at the time, took the job as a running backs coach at LSU. The new coaching staff at McNeese pulled Fuselier’s offer.

“It has been really surprising,” Barrow said of Fuselier’s lack of offers. “…The high school athlete is the one paying the price for the COVID year and all of that stuff. I have not been in the college setting, but I know they put a lot on measurables. His (concern) has been straightaway speed. My reply is that he is a football player. You see guys playing on Sunday that don’t run away from people, but they are football players.”

That being said, Fuselier’s impact was felt. He had a knack for big plays in big moments, including his fumble return for a touchdown against rival Port Neches-Groves in 2021. He finished the season with more than 1,000 yards of offense and eight total touchdowns.

He averaged more than 16 yards per catch and more than 10 yards per rush as the Bulldogs lined him up at running back throughout the season to get the ball in his hands.

“It has been a little disappointing,” Fuselier said. “It doesn’t matter where I play. If it is D-I or D-II or JUCO, I am just keeping the ultimate goal in sight.”

Fuselier has been staying in shape by running track for the Bulldogs and working out four times a week.

He currently has offers from Lamar University and University of Houston as a preferred walk-on.

“Anyone that gets me is going to get a playmaker,” Fuselier said. “They are going to get someone that has heart and someone that brings it on every play. Size doesn’t matter. If size mattered, the elephant would be the king of the jungle. It is all about heart.”