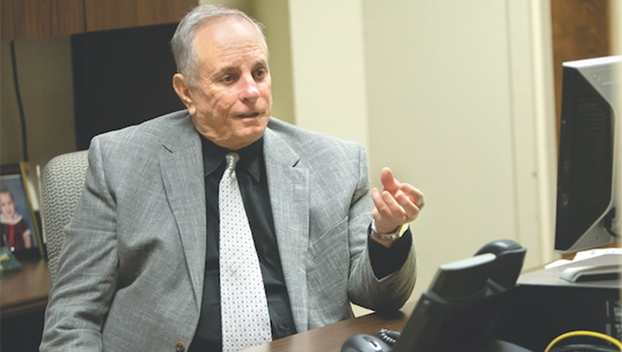 Over the past four decades, Rick Bryant has prosecuted nearly 200 cases with only one loss. (Rick Hickman/American Press)

Life journeys begin for a variety of reasons, and the quest that prompted Rick Bryant’s move into nearly 40 years of community service in the legal profession was actually quite simple.

“I didn’t want to punch a time clock,” he admits.

After serving in Vietnam, Bryant initially worked for nearly a year at Gulf Oil in Port Arthur before deciding to return to school using the GI Bill.

Bryant was raised in Port Arthur and moved to Lake Charles, Louisiana, when he was 13.

“I was terrible at foreign languages and you had to have 15 hours of it so I changed my major and got into something else,” he said with a chuckle. “I had no preconceived notion of what I would do, I just knew I was going to law school and would go from there. You don’t have to have a pre-law degree to get into law school.”

“When Lynn Knapp became district attorney (of Calcasieu District, Louisiana) in 1979, I applied up there and he hired me,” Bryant said. “I was the last person they hired and the lowest-paid assistant DA in the office. I was working in something called Child Support Enforcement for about a year and then Lynn came up to me and said, ‘Rick, we’re going to put you in felony prosecution.’ ”

Bryant said there were only four other felony prosecutors on the staff at the time, working out of the former Lakeside Bank building on the seventh floor.

Recalling the story with a chuckle all these years later, Bryant can say the switch worked in his favor. He’s enjoyed a career spanning nearly four decades as a prosecutor, district attorney and judge.

“It was a huge jump at the time,” he said. “I had never even tried a case; I appreciated the change, but I had never thought about being a prosecutor.”

Turns out prosecution — Bryant has prosecuted nearly 200 cases with only one loss — was his calling.

“They kept giving me the cases the others didn’t want to try and I kept winning,” he said. “I won a case against future DA Richard Ieyoub and Tom Lorenzi, which made news in New York. It was the James Humphrey case and he was convicted with no eye witnesses and we got some national publicity.”

Humphrey was accused in the April 28, 1978, second-degree murder of his children, Latasha Denise Humphrey and Janice Faye Humphrey.

After about three years, Bryant was promoted to chief of felony prosecutions and further honed his craft.

“I tried four six-person juries in one five-day week and got four convictions,” Bryant said. “I tried two second-degree murder cases in one week, which had never been done. Picked a jury on Wednesday, convicted on Friday. My mindset was of this wild prosecutor back then, all I wanted to do was try cases. I loved being in the courtroom. Still do.”

After Knapp chose not to seek re-election, Ieyoub was elected DA and became one of Bryant’s greatest mentors. Ieyoub would eventually leave his term early to run — and win — the state attorney general position.

“I never wanted to be DA, but after a month of not being able to find anyone else they all looked at me,” he said. “I said I would only do it if I could still try cases.”

Bryant threw his hat in the ring, running against Cliff Newman for about a month before Newman dropped out and Bryant won unopposed.

“When I became DA, my goal was to stay in the courtroom. Most district attorneys don’t prosecute cases. I did.”

Bryant said he likens himself to a laborer at a chemical plant.

“I started at the bottom and worked my way up,” he said. “I saw changes that needed to be made so we made them.”

Among them was the creation of the pretrial diversion program for young nonviolent offenders, misdemeanor probations and anti-drug programs.

Also during the time, the more notorious trials in Calcasieu Parish occurred — Ricky Langley, Leslie Dale Martin, Thomas Frank Cisco and Jason Reeves. Langley was convicted of second-degree murder in the death of 6-year-old Jeremy Guillory in 1992. Martin was convicted and later executed for the rape and murder of Christina Burgin in 1981. Cisco was convicted of fatally shooting Marty LeBouef, Stacie Reeves and Nicole Guidry in the early morning hours of July 6, 1997, and leaving their bodies in the coolers of the KK’s Corner convenience store. Reeves was convicted of murdering 4-year-old Mary Jean Thigpen in 2001.

The Langley case was among the more emotional ones for Bryant, who said his son was also 6 at the time.

“It’s probably the only time I’ve ever cried over a case,” said Bryant, who was there when the boy’s body was discovered. “The one thing with prosecutors is that you have to have passion with what you’re doing. You have to care about it and I got really close to a lot of families.”

Wilbert Rideau is the case Bryant considers his one loss.

Rideau was convicted in 1961 of first-degree murder of Julia Ferguson during the course of a bank robbery and sentenced to death. After the U.S. Supreme Court ruled that states had to rework their death penalty statutes because of constitutional concerns, the Louisiana Supreme Court judicially amended his sentence in 1972 to life in prison.

Rideau would ultimately appeal his case four times. The first new trial ordered was because of adverse pre-trial publicity. He was found guilty of murder again. The next two trials were ordered because the case was heard by all-male, all-white juries.

Rideau was convicted again of murder in 1964 and 1970. He had served more than 40 years in Angola when in 2005 he was tried a fourth time due to a technicality in picking the grand jury foreman in the initial indictment.

“I had to send my investigators to the FBI Academy to transcribe the (interrogation) tape because there were no other places in the country that did it and we found the only living court reporter to certify it,” he said. “The trial was difficult because we had only one or two living witnesses, everyone else had died. We had to have a couple of people read the parts of the victims back then.”

Johnnie Cochran, who was part of the defense team for O.J. Simpson, even came down from New York for the trial.

“Rideau was guilty,” Bryant said. “I told the jurors you have to look at this case like it happened yesterday. You can’t use your independent judgment and decide he’s served long enough and let him out, but that’s exactly what they did. We even had a video tape of him from 20 years earlier in which he’s being interviewed by a person out of Houston and she asked him why he killed those people and he said, ‘I guess I didn’t like white people.’ Despite all of that, when they came back with manslaughter I was shocked.

“That’s my biggest regret of my career,” Bryant said. “The jury came back with manslaughter as opposed to first-degree murder and that allowed him to get out on time served. I’ve tried 200 cases, I’ve lost one. He shouldn’t be free. I consider it a loss because he got out.”

His greatest accomplishment, he said, was the convictions of Robyn Davis and Carol Saltzman, convicted in the 2009 death of Davis’ husband.

“We had no eye witnesses, we had no confession, we had no DNA, we had no fingerprints, nothing,” he said. “It was a total circumstantial case, but I would say what we put together as a team was great. I also think it was also one of my finest closing arguments ever because I was able to tie it all together using their statements, cell phone records, the weather. They were all thinking they were going home that day, but in less than two hours the jurors found them guilty of murder. It was the most difficult case of my career.”

Bryant served as district attorney for three terms, unopposed each time, and served one term as judge.

Bryant said there’s been no greater privilege for him than going to bat for people and being the voice of those who don’t have it. It brought a lot of purpose to the work, he said.

“We worked as a family and all of these people were excellent in the court room, excellent with the public and excellent with law enforcement. Three of them became judges. I have been blessed to have a lot of good people support me, work with me and make me look good, to be honest with you. I can’t do anything by myself.”

For the past year, Bryant has acted a consultant for District Attorney Stephen Dwight’s office. That will end on Monday and he will begin training Calcasieu Parish Sheriff’s Office deputies on how to testify in a courtroom.

He also is acting as a defense attorney in officer-involved shootings and is on call in case search warrants are needed.

Should he be called again to act as a prosecutor in any parish of Louisiana, Bryant said he’d jump at the chance.