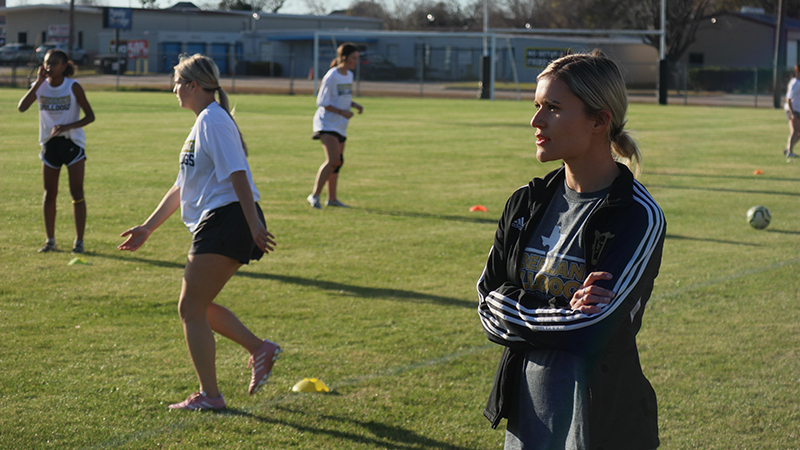 NEDERLAND — The Nederland girls soccer team has a new but familiar face at the helm. Layken Woolls graduated from Nederland High School in 2011 as a multi-sport athlete.

Woolls joined the district as the junior varsity coach last year before making the move to varsity. The squad graduated nine seniors, meaning several of her players from last year’s JV team moved up with her.

“I have really enjoyed it so far,” she said. “It was tough losing the seniors from last year, but I feel like the girls are ready. I have a lot of girls, especially sophomore girls, who are really invested in the program. I feel like we have a lot of good things coming.”

During her time as a student-athlete, Woolls played soccer, softball, volleyball and basketball.

“My sophomore year, I had to decide between basketball and soccer, and soccer obviously won that one,” she said. “I feel like that has been a big thing for me. Girls that have been in multiple sports, I’m willing to work with them because I understand what they are going through.”

Woolls is relying heavily on her younger players to set the tone. Sophomore Jayli Broussard and freshman Gabby Broussard (no relation) anchor the Bulldogs.

“It has been rough with our goalie out,” Woolls said. “She is actually going to Lamar. Others had to step up in that role. Jayli is our center back. She is actually a sophomore, but I feel like she is a silent leader. She is really strong for us back there.”

Jayli Broussard said the team has gelled this season.

“(Woolls) has made everyone technically better and we are working together better as a team,” she said.

Gabby Broussard, who is currently nursing an injury, said it was fun to watch the team win its first district match 3-0 over Memorial.

“It felt good to see my team work together to pull out a win,” she said.

Woolls said Gabby Broussard should provide a spark in her first year.

“She is another center back for me,” Woolls said. “I feel like I am happy to have her as a freshman. Those two are going to be a stable force for me back there. They are extremely aggressive. They have played soccer all of their lives and you can tell. They take that leadership role. As a center back, you have to do that and take control and they do that really well.”

Both players said they would like to win district, but said the main focus is on a playoff appearance.

Although this season is a rebuilding year for the Bulldogs, Woolls wants to see her team improve from game to game.

“I have already seen us get better from the first day we started practicing,” she said. “We have to work on moving the ball up the field and making dynamic runs. I’ve seen lots of great things. We have to take the changes we discussed from the last game and implement them into the next one.”