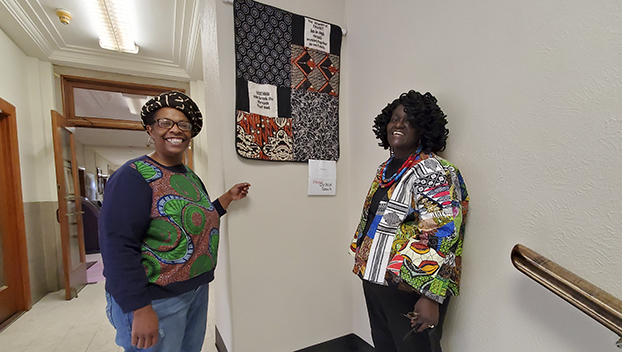 Family heritage, history and works of art created from African fabrics with bold, vibrant colors currently hang in the hallway at the Jefferson County Sub-courthouse in Port Arthur.

Laura Casmore and Rhonda Masters are the quilting “sisters” behind the exhibit.

Casmore is quick to inform others that quilting is not dead — it is very much alive in the African American community.

“Because a lot of times you hear the African American community saying ‘oh, nobody quilts anymore.’ That’s not true,” said Casmore, a Port Arthur native. “There’s thousands of thousands and probably a million African American quilters. So yes, we quilt.” 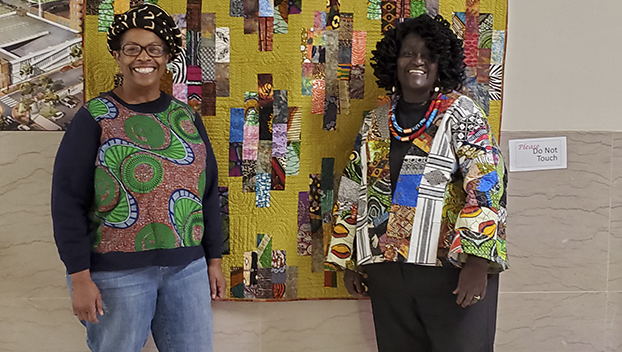 Inspiration comes from all over.

Casmore stood in front of one of her creations, Nichie’s Hair Braiding, that featured a panel in the center with a woman braiding another woman’s hair. Bright orange and yellow and black and white are used in the quilt. The name of the work comes from a woman who frequently gets her hair fixed, she said.

Jump At De Sun, another of Casmore’s works, shows two children doing just that — jumping at the bright, colorful sun above. This quilt, she said, was exhibited in Tuskegee, Alabama.

Masters calls Casmore a mentor. She was captivated by Casmore’s use of African fabrics and imagery when she saw her work at an event and the two became friends.

The women exhibit their works with the Golden Triangle Quilt Guild among other venues.

Masters still remembers the feeling of seeing Casmore’s quilts for the first time.

Some may worry that others won’t like the African fabric but Masters advises others to use it and show it off.

“You never know whose going to be there and be inspired and you create new quilters,” Masters said. 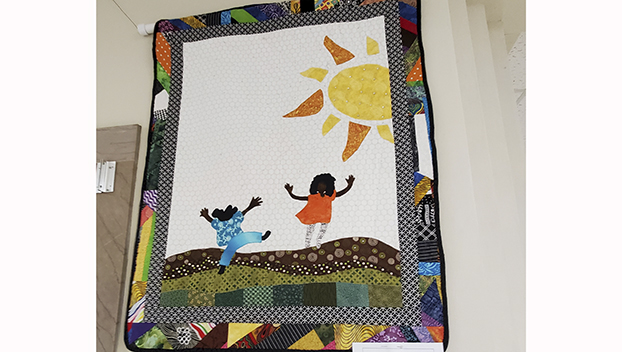 Casmore knows her style of quilting isn’t for everybody.

“I tell people my quilt style may not win prizes in the quilt world; but in the world of quilting, it is a prize, especially to me and to the eyes of those that like to see it,” Casmore said.

Perfection isn’t the goal, as this is art.

“I want people to enjoy what they see,” Casmore said. “I don’t want them to nitpick me and say, ‘oh.. that seam is not perfect.’ I want them to say, ‘oh I love that quilt.’ That’s what I want — that spark when people see my work. For them to just be excited about what they see.”

And people are excited at the quilts made by both women.

Franny Griffin works in the sub-courthouse and marveled at the artistry of the quilts hanging.

“I think it’s wonderful they brought this for all of us to learn about the culture and to educate us as for how quilts are made,” Griffin said. “To me each quilt brings something different to the exhibit and their style.” 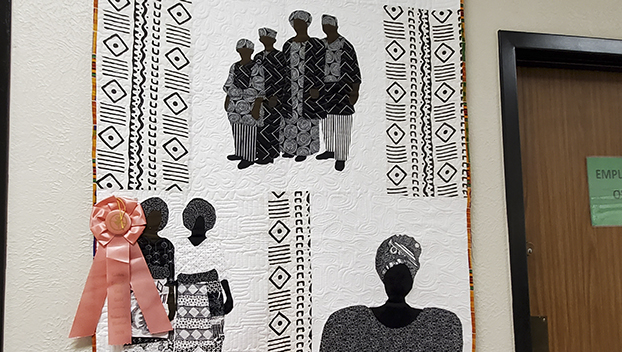 According to their bios, Masters is a proud Port Arthur native who relocated to the area with her family more than 10 years ago.

She always loved sewing and quilting and was “inspired to learn these arts by her paternal grandmother, Blanche, and mother, Phyllis.”

She became a member of the Golden Triangle Quilt Guild, where she met friend and mentor Laura Casmore.

Casmore, a Port Arthur native, has been a quilt artist for more than 20 years. Her work has been in shows around the country.

“Family heritage plays a major role in the artistry of her works,” according to her bio.

Casmore and Masters, along with quilter Sharon Mooney, formed the National African American Quilt Guild, whose mission is to preserve and uplift the heritage of African American quilting and quilters.

The exhibit called “Sistah 2 Sister, a Journey Between Two Sister Friends Laura M. Casmore and Rhonda Masters” will be at the Jefferson County Sub-courthouse, 525 Lakeshore Drive, Port Arthur, through Feb. 25. The courthouse is open from 8:30 a.m. to 5 p.m. Monday through Friday. The sponsor is Jefferson County Commissioner Pct. 3 Michael Shane Sinegal.