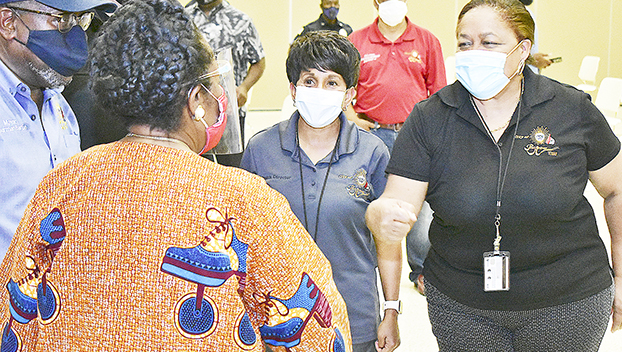 Talking with Judith Smith, one quickly learns she doesn’t take credit for the impact she’s had in Southeast Texas and literally across the globe. The Port Arthur Health Director has been selected to receive the 2022 Arthur E. Stilwell Award at the Greater Port Arthur Chamber of Commerce’s 122nd annual banquet Feb. 17. But still, months after learning about it, she’s in shock.

“I was surprised — honestly surprised — when I got a call from Ms. Pat Avery,” Smith told Port Arthur Newsmedia. “For a while I didn’t say anything. I was just like, ‘really?’ My thoughts were, ‘why me?’”

Because, Smith said, she was only doing her job.

And that included helping organize a mass vaccination hub at Jack Brooks Regional Airport in February 2021 for first responders and those with underlying health conditions. Later she organized a mass vaccine center at the Robert A. “Bob” Bowers Civic Center that administered vaccines to anyone over 18 that walked through the door — even if they drove in from out of state due to a lack of availability near their own residence.

And while that center has moved across from the Civic Center to the TAMS building, it’s still in operation today — as is a mobile vaccine Strike Team that travels to homebound people, provides vaccines to the homeless and has even vaccinated hundreds of seafarers docking in the area that were unable to return home without one.

But Smith is quick to point out that she is only one of many people who made all of that possible.

“Working with the team and staff here — I know the award will be given to me, but it’s a team effort,” she said. “None of this could have happened without them.”

Along with volunteers, members of her staff spent 12 or more hours a day helping with registration and vaccines when the Civic Center hub first opened and they’d see 1,000 or more people each day. They worked phones to help the elderly get registered without using the online process. And even now, they all — Smith included — share responsibilities at the TAMS building, whether it’s sweeping the floor or cleaning the restrooms.

So while the award may be inscribed with her name, Smith considers it to be one earned and belonging to the department that serves Port Arthur, Nederland, Port Neches and Groves.

“Sometimes when we’re getting awards, you feel very proud of the accomplishment,” she said. “But I don’t ever want that to overwhelm me as my first duty, so I’m constantly praying for the Lord to keep me humble and keep me a servant so I can do what’s necessary.”

Her humility was one of the things City Manager Ron Burton remarked on when it was announced that Smith would receive the award.

dignity, and pride,” he said. “We are thankful for Judith Smith’s loyalty and dedication to the City of Port Arthur.”

Even County Judge Jeff Branick noted her value to the Southeast Texas region and her dedication to fighting COVID.

Which, she says, was definitely not something that was expected.

“This has been a completely different season than I’ve experienced in the last 38 years,” she said.