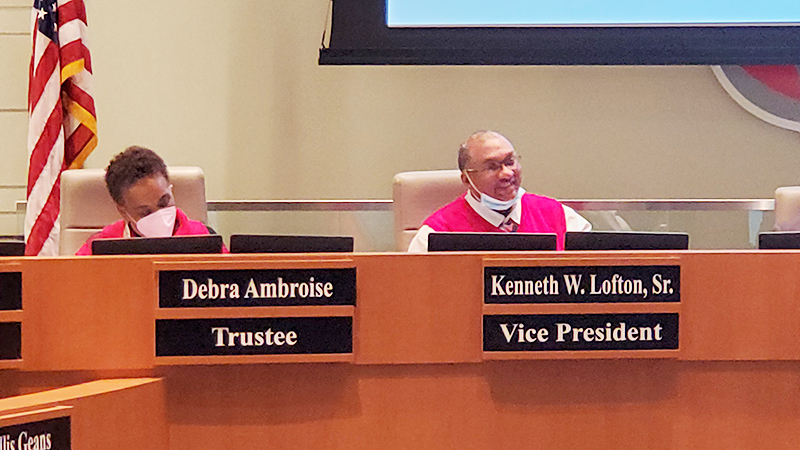 The name is in honor of two of the former high school’s most successful track coaches. The new name is the Ora Smith and Leroy Leopold Track.

The decision was announced Thursday night during the Port Arthur Independent School District Board of Trustees meeting.

Trustee Debra Ambroise made the motion on the name, which was unanimously approved. Board president Brandon Bartie was in attendance but was “under the weather,” so vice-president Kenneth Lofton Sr. presided. Absent were Trustee Taylor Getwood and Trustee Joseph Guillory II.

Smith, Lott said, coached Olympian Inika McPherson among other athletes and Leopold also saw his share of talented athletes including his son, Bobby Leopold, who went on to play in the NFL and played in the Super Bowl.

Superintendent Mark Porterie said there are plans for an official ceremony to be held next month. Both coaches still live in the city.

PAISD began talking of naming the track at Lincoln late last year. During the existence of Lincoln as a high school, the track never had a name and now that is was renovated, the board felt it is the right time to name it.

The district began taking submissions Nov. 30. There ended up being more than 320 submissions. The names paid homage to educators, coaches, sports figures and more.

In other action, trustees approved the purchase and installation of a new scoreboard for Memorial High School from Navco in the amount of $777,217.

Lott explained after the meeting that the scoreboard is used for more than football games; it is used for special events such as graduation and community service events like walk-a-thons.

“The current Jumbotron has been having continuous issues,” she said. “Such as power modules failing that resulted in us not being able to use the Jumbotron at several events over the past few years.”