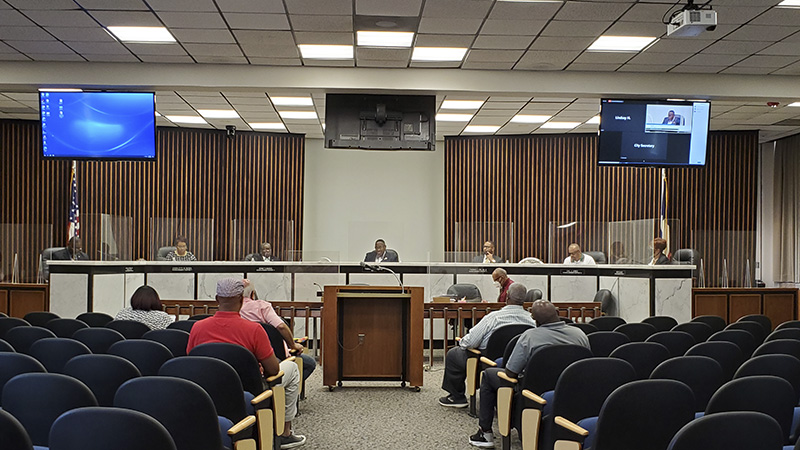 A joint meeting between Port Arthur City Council and Port Arthur Economic Development Corporation was held in September 2021, where an interim director was named to the PAEDC. (Mary Meaux/The News)

The joint meeting comes after the December appointment from the Economic Development Corporation of Jessica Carpenter to serve as CEO. She was one of three finalists chosen for the position formerly held for 17 years by Floyd Baptiste.

Baptiste submitted his resignation in July but remained at the helm through Sept. 30. It came following a grievance filed against him in February, 2021, with which he said he disagreed with “100 percent.”

But on April 29, the EDC board accepted the findings and voted for reprimand, with the exception of John Chirafis, who resigned in July along with the EDC’s legal counsel, Germer PLLC.

“I probably made a hasty decision and thought maybe it’s time for me to go,” he previously told Port Arthur Newsmedia. “I submitted my resignation and, after that, sat back and thought about it and got a lot of phone calls, some from citizens.”

However, the board did not consider a request to recall his resignation.

George Davis was named interim CEO but did not apply for the spot permanently.

While a request to approve Carpenter’s appointment was pulled from a recent city council meeting, the council did vote against the EDC’s request to rehire Germer PLLC.

Because the council and EDC are separate entities, the council has final approval on projects put forth by the EDC. Earlier this year Mayor Pro Tem Donald Frank proposed a discussion about changing the Economic Development Corporation from a Type A to a Type B, saying it would allow the board to “promote and develop new and expanded business ventures that create or retain primary jobs.”

The Port Arthur Economic Development Corporation is a Type A, which can fund industrial development projects such as business infrastructure, manufacturing and research and development, as well as funding military base realignment, job training classes and public transportation, according to the Texas Comptroller’s website.

A Type A can put propositions for Type B projects on an election ballot and let voters make the decision.

However, Mayor Thurman Bartie said that choice would only be made by the residents of the city.

“Despite outside statements to the contrary, the Port Arthur City Council, and I repeat, the Port Arthur City Council does not have the authority to change the designated type of EDC without voter approval,” Bartie said during a press conference at the front of city hall in July. “And I will repeat that. We can’t change anything without voter approval.”

Today’s (Jan. 25) joint meeting is scheduled for 5 p.m. at City Hall, 444 4th Street. Carpenter’s appointment, the grievance process, a proposed lease agreement and a contract regarding administrative services are all scheduled for public session. However, the appointment of a CEO for the PA Economic Development Corporation, as well as legal counsel also are listed under closed meeting items.