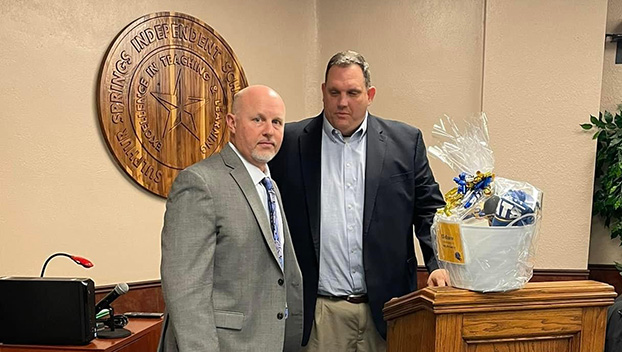 SULPHUR SPRINGS — The Sulphur Springs ISD School Board voted to make Brandon Faircloth the next athletic director and head football coach Monday during a regular meeting.

Faircloth, who was in attendance for the school board meeting in Sulphur Springs, spent the past 13 season with the same title for Port Neches-Groves High School.

“(Sulphur Springs) has great tradition, wonderful community and high expectations in academics and athletics,” Faircloth told Port Arthur Newsmedia. “I always felt like when you can get those four things, you have a chance to be successful. They have been a little down over the last few years, but they made a little change and I am excited for the opportunity.”

Faircloth is looking to start his new job next week.

He said his son will go with him but added his wife, who works for PNGISD, and daughter will finish the school year in Port Neches.

“We had so many great memories (at PNG),” Faircloth said. “Not one in particular. Just 13 years of wonderful players, wonderful families and a wonderful community.

“I have so much respect for everyone at PNG, and those memories will be unforgettable. The first people I thank are my family. Second, I thank the players. That is who I got out of bed for everyday. To be able to coach those guys like we did and have the success on the field is something I will never forget. It was a wonderful, wonderful time.”

PNG posted the job opening for the football coach and AD position on the district’s website Monday.

Superintendent Mike Gonzales released a statement Monday afternoon regarding Faircloth’s name being recommended for the same role at another high school.

“I have had the honor of working with Coach Faircloth for 12 of the 13 years he has served as Head Coach and Athletic Director,” Gonzales said.

“I am proud of his many accomplishments, and I am excited to see what the future holds for him at Sulphur Springs ISD. I am confident that Coach Faircloth’s dedication and commitment will lead to further success. I wish him the best of luck.”

Gonzales said the Port Neches-Groves Independent School District plans to begin the search for a new head coach and athletic director as soon as possible.

Faircloth will have to rebuild with his new team as the Wildcats went 0-10 last season in 5A Division II.