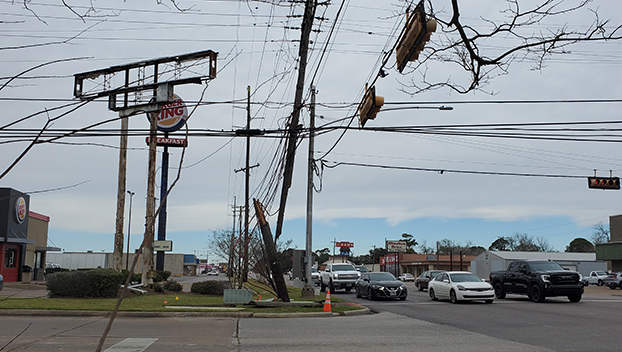 A planned outage is set for Sunday to allow for Entergy Texas to repair this damaged utility pole at Twin City Highway and 32nd Street in Port Arthur. (Mary Meaux/The News)

A planned power outage is set for Sunday allowing Entergy the opportunity to replace a broken pole at Twin City Highway and 32nd Street in Port Arthur.

The outage is set to take place from 8 a.m. to 2 p.m. Sunday and affect about 96 customers, said Andy Schonert, communications manager for Entergy Texas.

The general area affected is roughly along Twin City Highway from around the Raceway area to the Missions Attic area and also the neighborhood around Greenlawn Memorial Park on 33rd, 34th and 39th streets in Groves.

Schonert said the affected customers should have received a call letting them know about the outage earlier this week and Entergy has reached out to some of the businesses along the highway to answer questions.

Customers can stay up to date on Energy issues by signing up for text alerts and also check the outage map on their website which should show the outages Sunday.