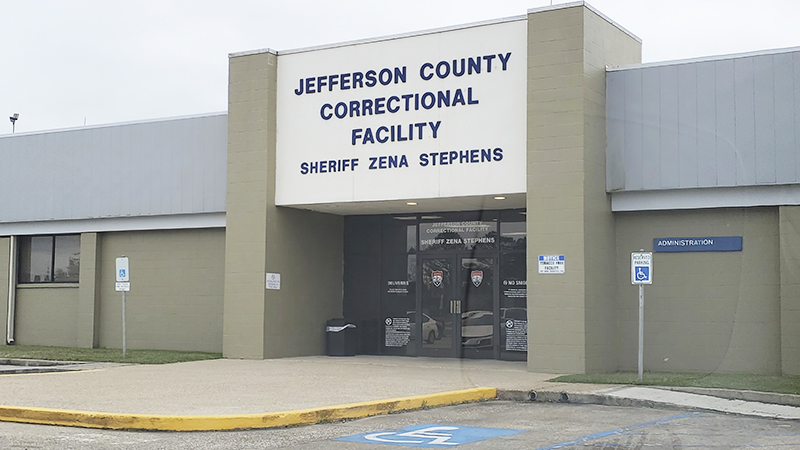 A view of the front of the Jefferson County Correctional Facility. (Mary Meaux/The News)

The issue of inmate housing reached Jefferson County Commissioners Court this week as a settlement for credits for Mid County cities was approved based on the final settlement with the City of Beaumont for inmate housing.

The issue dates back to June 2011 and a dispute over the charges for inmate housing between the county and Beaumont. At that time, the local entities were told the cost of housing inmates would increase to $75 per day. Previously that figure was $52 a day.

Beaumont opted at that time to pay 35 percent of what was being billed to all local entities. A tally of what Beaumont actually owed came to $3.6 million.

The City of Port Arthur also joined in and started to pay 35 percent of the bill around August 2014. Port Arthur ended up owing the county $1 million over the timeframe, County Auditor Patrick Swain said.

The county filed a lawsuit against Beaumont for the missing funds, while the Mid County cities were paying 100 percent of what they owed the county for inmate housing, he said.

After mediations and an agreement was made, the county opted to drop Beaumont’s bill to $2 million and Port Arthur’s to $540,000.

The rate comes out to be approximately $75 a day per inmate for felony, Class A and Class B offenses.

On Tuesday, commissioners established credit for the Mid County cities that basically overpaid for the past 11 years, he said.

Jefferson County Pct. 3 Commissioner Michael Sinegal explained the settlement from Port Arthur’s amount due will go towards a diversion center and that Port Arthur settled for approximately 55 percent of what they owed.

Credits from the other cities will also go to the diversion center.

The idea of the diversion center came from Jefferson County Sheriff Zena Stephens. If the project gets the green light, funding could come from the credits on the inmate housing and from the American Rescue Plan Act.

Stephens said the diversion center is something she has heard of in other counties.

Some of the individuals may never have had mental health care, she said, adding they do not belong in the jail.

There is no real timeline at this point, but Stephens hopes the project will get started it the next two years.