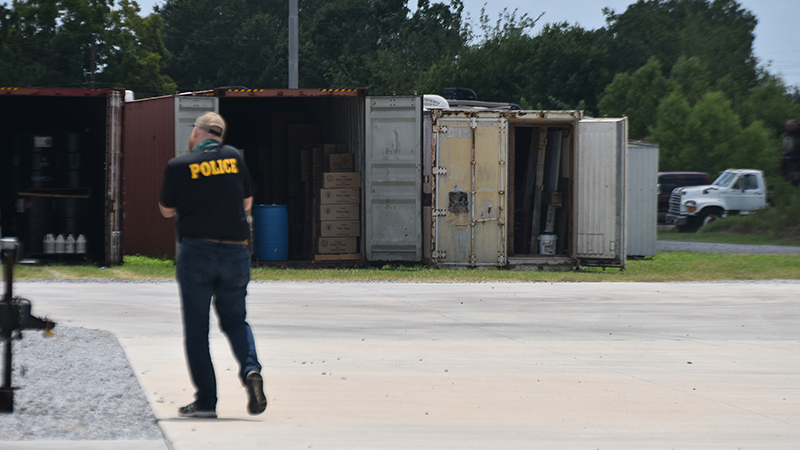 Multiple agencies and officers conducted raids and arrests in July 2020 at the location in Nederland. (Mary Meaux/The News)

Two Jake’s Fireworks defendants, including the owner of the Nederland business, have pleaded guilty to federal drug trafficking violations in the Eastern District of Texas, announced U.S. Attorney Brit Featherston on Tuesday.

Jake Ellis Daughtry, 35, of Nederland, pleaded guilty to conspiracy to possess with intent to distribute a date rape drug over the internet to an unauthorized purchaser.

According to information presented in court, Jake Daughtry and Kip Daughtry are the leaders of a Chemical Trafficking Organization (“CTO”) cell operating on a national scale.

Investigation of the organization began in 2018 when DEA West Palm Beach, Florida intercepted mail parcels of a chemical identified as 1,4 butanediol, commonly referred to as “BDO.”

BDO is a chemical manufactured only for industrial or laboratory use as a floor stripper or vehicle wheel cleaner and is not intended for human consumption. Investigators determined when BDO is ingested, it immediately metabolizes into GHB (a known date-rape drug) with the same effects, causing potential overdoses, addiction, and death.

DEA traced the seized parcels to their origination point, Right Price Chemicals, a business located on Twin City Highway in Nederland and owned by Jake Daughtry. A seasonal fireworks business called “Jake’s Fireworks” is also operated at that location.

Customers from all over the United States were able to order quantities of BDO from the Right Price Chemicals website in small amounts to use for personal consumption. The Daughtrys continued to sell BDO even after becoming aware some customers were ingesting the substance for its narcotic effect, rather than using it for its intended commercial purpose.

The defendants were indicted by a federal grand jury June 3, 2020, and face up to 20 years in federal prison. The maximum statutory sentence prescribed by Congress is provided here for information purposes, as the sentencing will be determined by the court based on the advisory sentencing guidelines and other statutory factors.

In addition, Jake Daughtry, Joe Daughtry, Sandra Daughtry, and Kip Daughtry agreed to the entry of a permanent injunction that prohibits them, or Right Price Chemicals, to ever sell or distribute BDO to anyone, anywhere, at any point in the future.

“After being notified by Florida law enforcement that this dangerous and lethal chemical was being sold to users for a nefarious purpose, East Texas law enforcement agencies took action to protect the public and prevent others from falling prey to the sale and use of this dangerous substance,” Featherston said.

“This was a complicated investigation involving numerous investigative agencies and both the criminal and civil divisions of the U.S. Attorney’s Office.  Their collaborative efforts have made our community and country a safer place to live.”

Essential support and coordination was provided by numerous components of DEA headquarters and the Department of Justice’s multi-agency Special Operations Division (SOD).  This case is being prosecuted by Assistant U.S. Attorneys Christopher Rapp, Donald Carter and Robert Wells.