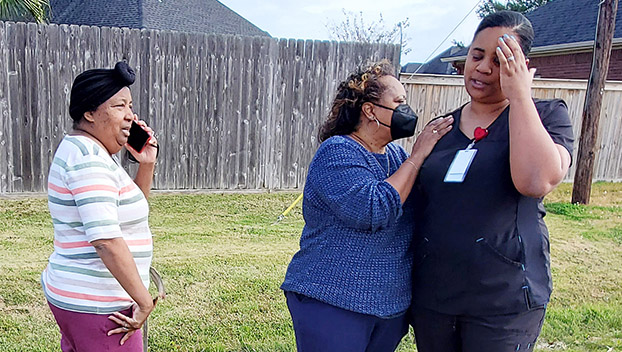 NEDERLAND — Erika Thomas jumped from her desk and quickly left work when she learned of a threat at Nederland High School Wednesday morning.

The texts she received from her son and daughter left her shaken.

“My son texted me and said they might have a school shooting, and if anything happens, I love you,” Thomas said while standing on North 18th Street across from a parking area not far from Spurlock Road on Wednesday morning. 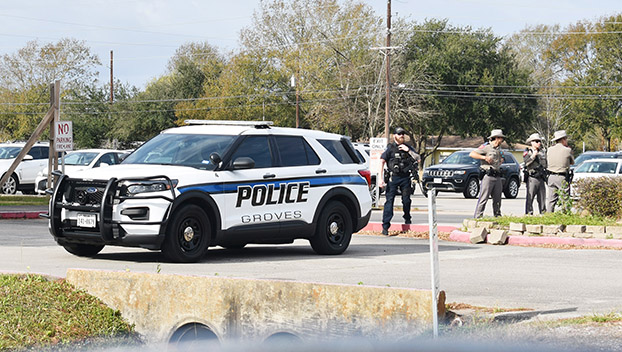 Thomas’ daughter sent a similar text telling her, “mom the school was on lockdown” and she thought someone might have brought a gun to school. She ended with “I love you.”

Thomas and others parked along the side of the road across from the school and watched as armed law enforcement patrolled the scene.

The all-clear was later given and the threat deemed not viable.

But for that 90 minutes or so, there was tension and worry for those who watched and waited.

Josie Chatmon, aunt of Thomas, was there for emotional support and was prepared to take the children out of school before learning of the lockdown.

Corine Jones joined the other women as they spoke of their fear. 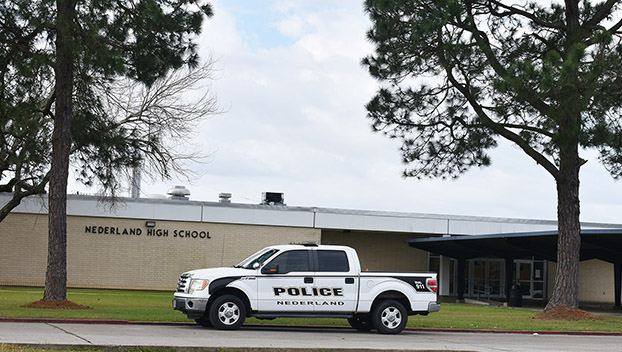 A heavy police presence was visible at the high school. (Mary Meaux/The News)

“I have grandkids in the district and they (district) contact me first and I contact the others,” Jones said. “I just came to see for myself. I felt they were safe once they communicated with me. It feels safer now (seeing the amount of law enforcement on site).”

Nederland Police Chief Gary Porter said someone called the high school at approximately 9:45 a.m. Wednesday saying they were going to shoot up the school. The call was answered by one of the administrative staff, and the school immediately went into protocol for such threats.

“Right now we are comfortable this is a prank and there is no viable threat,” Porter said at approximately 10:30 a.m. Wednesday.

He noted the heavy police presence was outside and inside of the school, and other schools in the Nederland Independent School District were also being monitored by law enforcement as a precaution.

The person responsible for the call, if caught, is going to be criminally charged, Porter said.

Rene Latiolas, communications coordinator with NISD, said a school resource officer had communication with the caller, the school was put on immediate lockdown and Nederland Police were contacted. 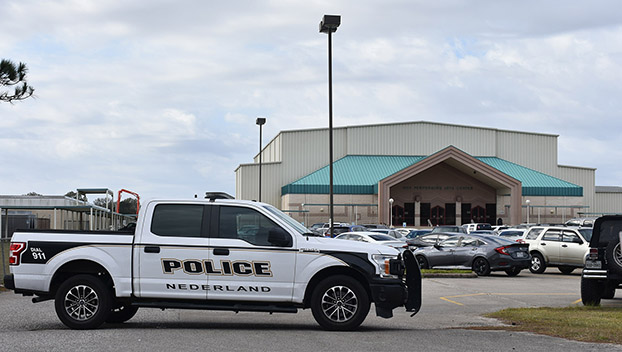 Entrances and exits at the high school were blocked by law enforcement during the lockdown. (Mary Meaux/The News)

The threat was determined to be non-credible and the lockdown was lifted.

“For the remainder of the day, there will be an increased law enforcement presence around the campus,” she said in a news release. “As always, the safety of our faculty, students, and staff is our top priority. We appreciate the cooperation of our school community.”

While the threat at Nederland High School was deemed not viable, threats at schools across the state and nation have turned dangerous and deadly.

In October, a Timberview High School student in Arlington shot and injured four people during a school shooting.

Also in October, a 25-year-old man reportedly went to YES Prep Secondary School in Houston and shot and wounded the principal over a grudge. The victim lived.

Just a few years ago, in 2018, came the deadly Santa Fe School shooting that left 10 dead and 10 injured.