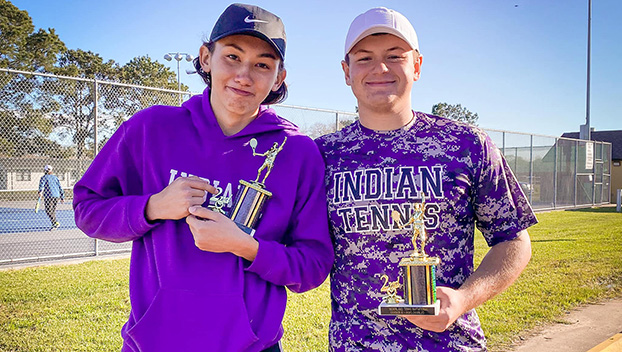 PORT NECHES — There’s no question that Kaden Allen has a bright future.

The Port Neches-Groves High School senior is in the top 1 percent of his class and has already been accepted to the University of Texas.

He’s served as a member of Geronimo’s Crew, belongs to the National Honor Society, is a member of the Student Council and is a peer tutor.

But if that’s not enough, the young leader was chosen last summer as a delegate for the State of Texas in the 2021 Congress of Future Medical Leaders, which was held in October on the campus of Harvard University.

In addition, he was chosen for the National Youth Leadership Forum: Medicine, which will take place this summer at the Rice University campus.

“Kaden’s nomination was signed by Dr. Mario Capecchi, winner of the Nobel Prize in Medicine and the science director at the National Academy of Future Physicians and Medical Scientists to represent Texas based on his academic achievement, leadership potential and determination to serve humanity in the field of medicine,” said Shalon Allen, Kaden’s mother.

According to a release from the National Youth Leadership Forum: Kaden is following in the medical career paths set by his parents. Shalon is a nurse, and Kaden’s vision is to become a physician.

“As an alumna of Envision myself, I am excited for Kaden Allen to meet, work and collaborate with other high-aspiring students from across the country and the globe,” said Amanda Freitag Thomas, SVP for Envision.

“Hands down, my favorite part of attending an Envision program was being with motivated students in an environment designed to help us challenge our assumptions, meet new people and grow.”

Kaden will attend the forum in June.

“At The National Youth Leadership Forum; Medicine, students build the confidence and skills needed to excel at college and in the workplace,” Thomas said.

“They learn how to adapt to and communicate in new situations, to new challenges, and with new people, which, given how rapidly the world is changing due to technology and innovation, are essential skills for success.”