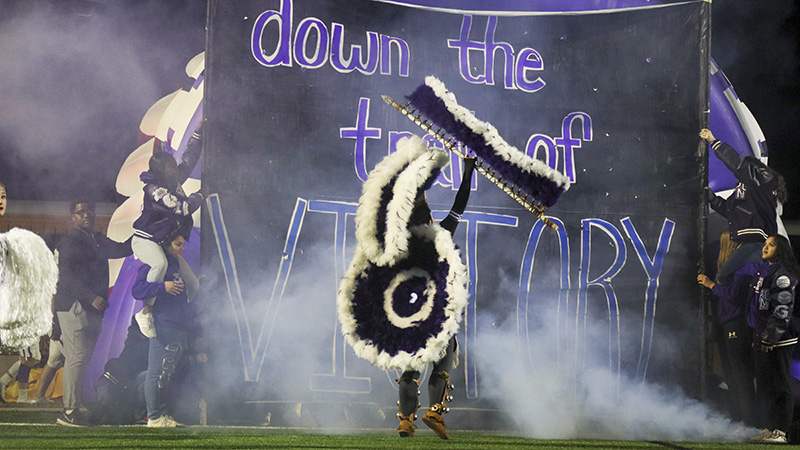 I’m what those of us in Mid County jokingly call a traitor.

In other words, I “crossed the tracks.”

You know, the railroad tracks that separate Nederland from Port Neches.

While I moved between the two districts often as a child, I was a Nederland student from seventh grade on. I graduated from there in 1999. And when ex husband, who is also a Nederland graduate, and I had our first child together, we made a very early agreement that our children would never attend a PNGISD school. They would never own a purple shirt. That’s just not what people from Nederland do.

But we just happened to be living in Port Neches when we got custody of his young children from his first marriage, one of which was school age. We had no choice but to enroll him in Woodcrest.

“It’s just for one school year,” we told ourselves. “We don’t want to make too many big changes at once, so let’s give him one school year. He won’t remember any different.”

But as he settled into a purple-and-white world, it was time to enroll the next one. And given I had just had my second biological baby a few months prior, no one was moving anywhere. We had gone from one full-time child to four within nine months. I was too tired to move off the couch, much-less out of the district.

That’s when it happened.

Without warning, without notice — we somehow became purple people.

And we didn’t just accept it, we embraced it like a favorite cousin that had been out of the country for a couple of years.

Our oldest played football before graduating from PNGHS.

The second-oldest was involved in student journalism before graduating from PNGHS.

My current junior is a proud member of the drumline.

My current freshman has a knack for shop and woodwork.

And I live near the school where, even if I don’t go, I can still hear Cherokee from my porch on Friday nights.

“PNG has done some awesome things,” Superintendent Dr. Mike Gonzales said at this week’s board meeting. “They did awesome things before I came, and they’ll do awesome things after I leave. Because the honor, pride and tradition is bigger than one person.”

When my husband and I decided to part ways in 2018, we agreed our children would spend time with each of us equally — a week with me, then a week with him, continued.

Most custody papers include a location clause, or a section that says the parents must reside in certain counties or within certain amount of miles within each other to ensure neither parent moves too far away.

Our papers have a similar clause, but with a bit of a twist: (the children) “shall reside within Jefferson County and shall attend school within the Port Neches-Groves Independent School District.”

People say they bleed purple, but my claim is in writing and notarized.

ASK A COP — Can you drive in your underwear?