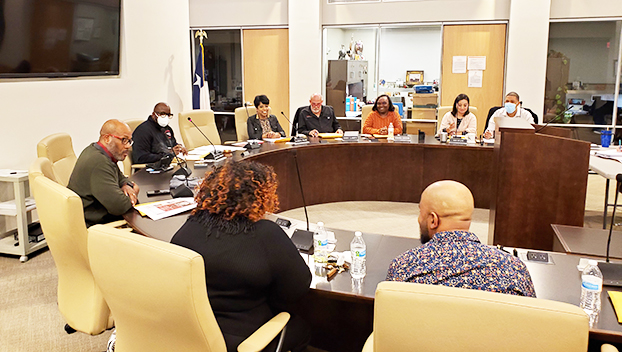 The hiring of a leader for the city’s economic development corporation will have to wait a week due to a technicality.

Port Arthur City Council was set to vote on a resolution hiring Jessica Carpenter as the PAEDC’s new CEO on Tuesday morning as well as approving the PAEDC’s employee manual.

Interim CEO George Davis asked for both items to be pulled from the council’s agenda until the EDC’s Tuesday night meeting. The reason was simple.

“Today (Wednesday) we will send over everything so next Tuesday’s (council) agenda will have both adoption of the personnel annual and the CEO’s contract,” Davis said.

But Carpenter has not been left out in the cold. Davis said a member of the board has been in contact with her on the issue.

The issue of the employee manual has been a topic of discussion, first coming to light with the resignation of previous CEO Floyd Batiste.

The manual was originally discussed in September but after Batiste left, it was put on the back burner.

The manual did not cover what to do if there should be a grievance or harassment or anything of that nature against the CEO, Davis said.

Davis said the board is adopting the same employee manual as that of the city of Port Arthur but with the added items on grievances and harassment.

Carpenter was selected in early December by the EDC to fill the position left by the resignation of Floyd Batiste, which was submitted in July but did not take effect until Oct. 1.

Carpenter was one of three finalists, the other two being Biguita Hernandez-Smith and Larry Calhoun.

However, her election to the position was unanimous.

“The Board has advertised the position, evaluated candidates and have gone through an interview process of the final candidates,” Davis said in his memo. “The Board has offered the position to Ms. Jessica Carpenter, and would like to enter into an agreement with Ms. Carpenter for her professional services and employment as Chief Executive Officer of the Port Arthur Economic Development Corporation.”

— Monique Batson contributed to this story.