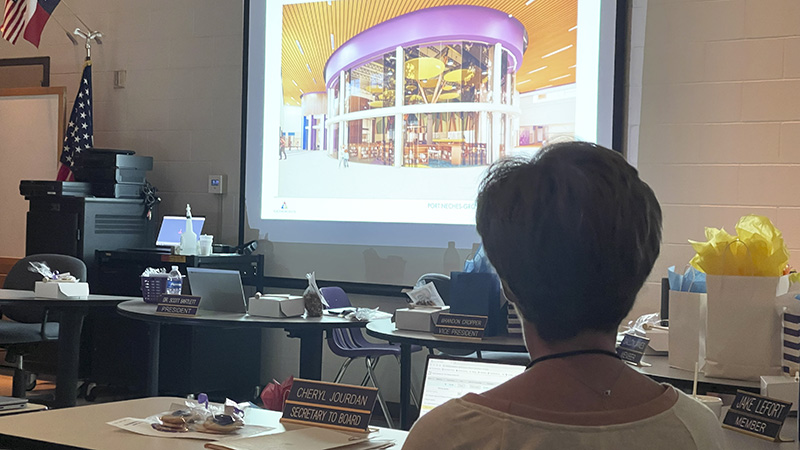 The Port Neches-Groves ISD administration could be in its new building before the end of the current school year.

“We’re hoping that we can get into the new administration building sometime in late March, maybe early April,” Superintendent Dr. Mike Gonzales said Monday during the district’s monthly board meeting. “It’s going to be something that we can really be proud of.”

To see the slideshow presented to board members Monday, click here.

In 2019, the district made the decision to move into the former Neches Federal Credit Union at 766 Magnolia as the financial institution was building a new office at the corner of Magnolia and Merriman on land owned by the district.

The new facility, Gonzales said, offers a lot more room for administrators, as well as space for training that previously had to take place in other locations.

“We have some school districts in the area that have some really nice administration buildings,” the superintendent said. “And we consider ourselves the very best school district in the area, and the state, and so why not have a facility that says that?” 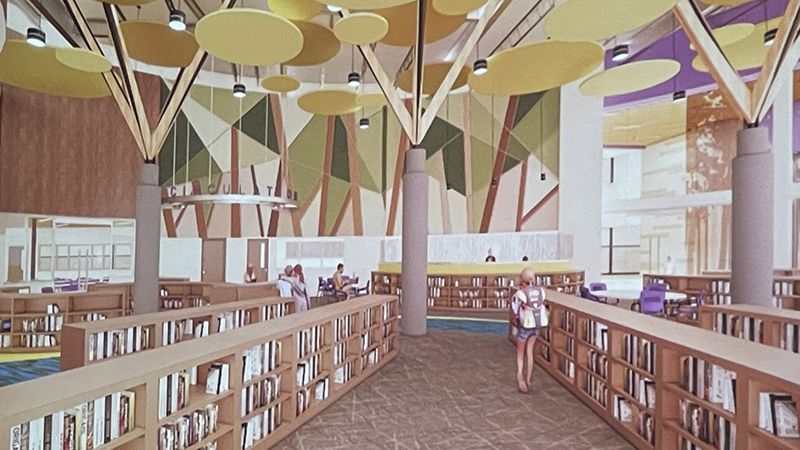 A view of what the library will look like inside the two new PNGISD elementary schools. (Rendering)

The current administration building in Port Neches was built in the 1950s.

“For years we’ve focused on giving the students and the teachers everything,” he said. “We’ve always focused on building the best schools and the best facilities for our students and our staff. And it’s time for us to do something now for our admin.”

Gonzales’ comments came before an update on the bond issue, specifically a video walk-through on how the new prekindergarten through second grade schools would look on the inside and outside.

Rayce Boyter, principal in charge at VLK Architects, gave the presentation before the board, pointing out everything from parking lots to color schemes.

The schools are part of a 2019 bond approval that is consolidating four Groves schools and three Port Neches schools into four campuses.

The new schools will have large pick-up/drop-off areas that allow for entry into the front office and cafeteria. They will also include a stage in the middle of a gym area and cafeteria area with a partition that allows for the two areas to be combined for things such as programs and plays.

Even the color scheme, Boyter said, was taken into consideration.

“We worked in some cool colors here,” he said during a viewing of one room.

Each school will have a large media area, or library, that is built to carry an outdoors feel.

“The idea was to bring the outdoors into the building,” Boyter said.

The elementary schools are intended to open in the fall of 2023.

The intermediate schools are under construction and expected done by fall of this year.