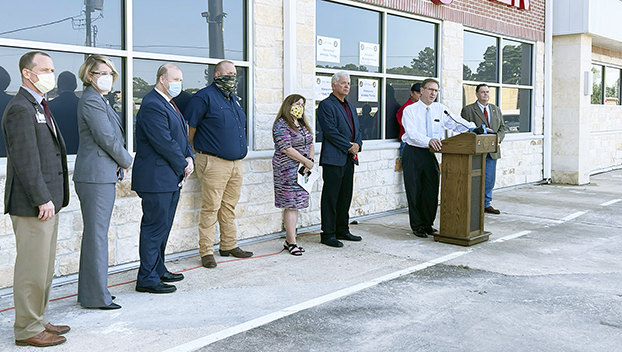 While the Regional Infusion Center that administers monoclonal antibody treatments to COVID-19 positive patients has doubled the amount of people it’s able to treat, a shortage of the only approved treatment for the omicron variant has forced the center to limit the patients it treats.

Todd Senters with Baptist Hospitals of Southeast Texas said the center received 126 doses of Sotrovimab last week, but it was only a portion of the 1,000 doses ordered.

On Wednesday they were informed they will be sent 84 doses Friday.

Sotrovimab is the only of three antibody treatments that’s federally approved to treat the current variant causing a spike in COVID numbers.

Because of the shortage, Senters said, the infusion center has gone back to guidelines set by the U.S. Food and Drug Administration when treatments first began — those with underlying health conditions and/or those at high risk for hospitalization or death.

The hospital official said right now the center, which serves four counties including Jefferson, is treating about 60 patients a day. However, as more cases of Sotrovimab become available, that number will increase.

This week Commissioner’s Court was canceled as Jefferson County Judge Jeff Branick and his wife recover from COVID.

But the judge, who Senters said is doing better and working with officials to continue operations, addressed the center during last week’s meeting and said they had already begun working with the state to increase operations at the infusion center.

“We’ve been working for several weeks — just as soon as we started to see an increase in the number of daily new infections of COVID in Jefferson County,” Branick said of himself and Mike White in emergency management.

“I will tell you that during the last week and a half, we had such a dramatic increase in the number of new infections that people were calling the call center and it was overwhelmed,” Branick said recently of the infusion center. “They were not getting answers. They were getting frustrated. They were calling for a period of a day and a half without a response. And it was just there were so many people calling.”

Branick said the state agreed to pay the county for additional staffing at the center.

However, the judge added, they were seeing up to 60 no-shows each day.

“I think one of the reasons was because initially when we had five chairs before we were able to staff up people called, made appointments, and they were getting appointments 8 days, 9 days out,” he said. “And in the interim they got better and either did not call in, tried to call in and weren’t able to get through to the call center to cancel their appointment. And so steps have been taken to (eliminate) those issues.”
The number to reach the infusion center, located at 5550 Eastex Freeway in Beaumont, is 409-550-2536. However Jefferson County Public Information Officer Allison Getz advised those that call it to exercise patience as calls are still at an extremely high volume.

Senters said when it comes to hospitalizations, the current variant has not required as many as its predecessor. Currently Baptist Hospital in Beaumont has 74 COVID patients in the hospital; seven in ICU with five of those on ventilators.