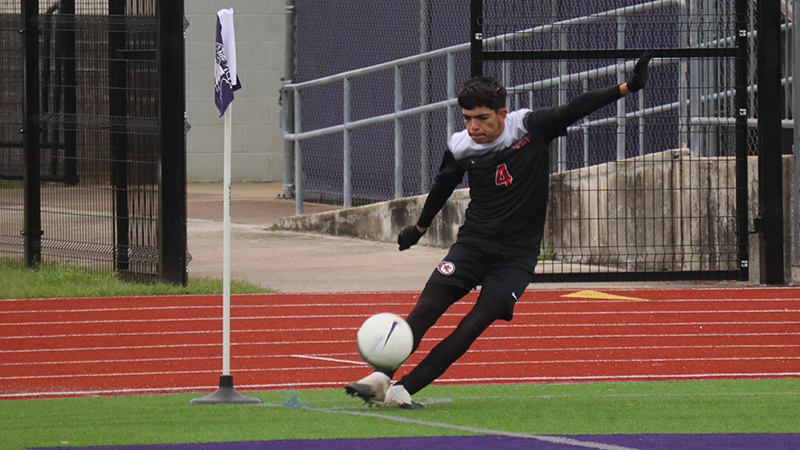 Memorial boys soccer team coaches and players see room for improvement as they were able to grab a win during the PNG Kickoff Classic Friday in a 2-1 win over Silsbee.

Head Coach Chris Bradford said he was happy to get the ball rolling, despite the 40-degree weather.

“I am excited,” he said. “It is great to be back in full soccer-playing mode. With the virtual learning, we had a lot of kids out of school last year. We have a lot of kids back and everything is looking good for the future.”

Bradford’s team has several returners from last year’s squad and the coach plans to lean on seniors for leadership.

“We have a lot of guys that have been in the program,” he said. “We have a good senior corps. We have captain Daniel Maldonado. He is going to be one of our leading forwards this season.”

Bradford was hesitant to single out newcomers before he gets a good look at them to assess how they will help the team this season.

“I am a little anxious to see what they can bring,” he said. “I want to say most of my best players are already here. I have seen most of them but nothing that is turning heads yet.”

Bradford wants his team to compete in the postseason.

“I am taking it little by little and seeing how it goes,” he said. “We have a goal, but we are trying to take it step by step.”

He felt like his team played better Friday than Thursday.

“That goal was a mistake,” Cervantes said. “I think we played pretty good but there were some errors and mistakes. I think we can improve for tomorrow. We will see. It feels nice to get started. Even though it is pretty cold.”

Cervantes said this is his first year playing goalkeeper.

“I was pretty nervous,” he said. “There was some pressure and I didn’t want to let my team down. It was pretty fun and pretty nice. I just want to get better and see how it goes. Before moving here from Louisiana, I played forward.”

Memorial will play Vidor at 2 p.m. today in the PNG Kickoff Classic.