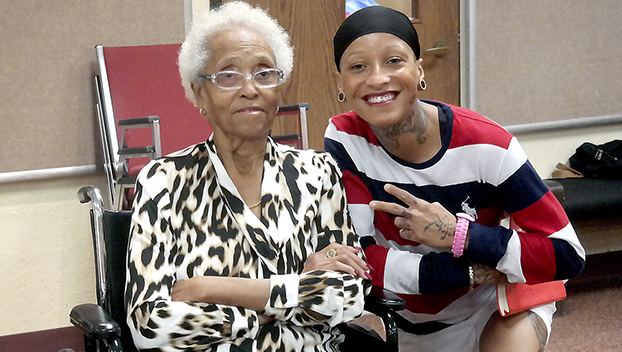 1992 Olympic track coach Barbara Jacket, left, and 2016 Olympic track athlete Inika McPherson pose for a photo at the Lucy Stiefel Gallery of the Port Arthur Public Library. They were at the library for programs including a presentation by author B.J. Pierce followed by an NAACP youth rally.

Barbara Jacket, a Port Arthur native who earned an impressive amount titles and was the second Black woman to coach an Olympic team, died Thursday. She was 87.

“My aunt, Barbara Jacket, was a tough cookie, but took her last breath yesterday,” niece Dayna Caddell posted to social media Friday. “She led an amazing life full of accomplishments. This is one for the books…”

Jacket was born in 1934 in Port Arthur, where she “began her athletic career playing softball with high school students at age 10 in 1994,” according to information from the Museum of the Gulf Coast.

She played basketball and ran track for Lincoln High School before graduating in 1954.

And following college, she began her coaching career.

And in 1992, her Olympic team won four gold medals, three silver medals and three bronze medals — more than any team since 1956.

Afterward, the Southeast Texas native would go on to work and coach for more than 30 years at Prairie View A&M.

Currently, Jacket is a suggestion for the names of the Lincoln Middle School track, which the district plans to name soon in honor of a Port Arthur native.