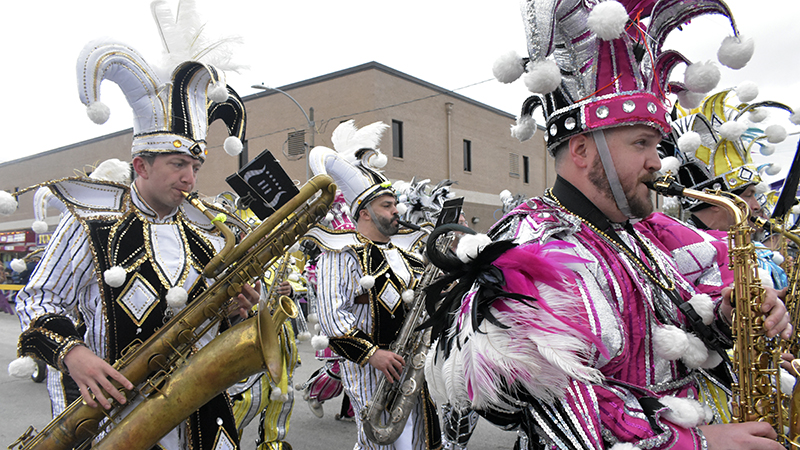 The Philadelphia Mummers made an appearance at the 2018 Mardi Gras of Southeast Texas. (File photo)

Let me rephrase that. I miss the celebration that happened in Port Arthur for more than two decades. Understand I am not, in any way, criticizing or making negative comments about the celebration now being held in Beaumont.

My thoughts are more of the nostalgic kind.

A few days ago I realized we are approaching Mardi Gras time and mentioned this to a co-worker. Soon I was bombarding her with my memories of the event.

I remember when we were in our old building downtown and could just pop in the gates to get something to eat. That meant carnival food instead of a sandwich. Plus with so much bustling downtown it was easier that way instead of driving somewhere.

It was great seeing the floats on the seawall as they lined up for the parades. Framed by picturesque Lakeshore Drive and the waterway, we would watch ships and tugs go by, some of which would honk and the crowds of float riders would wave back.

It took a lot of convincing from coworkers but I eventually began to ride the company float (at one point we had two floats). Turning that corner from Woodworth Boulevard onto Procter Street was always a rush because that’s when you could really see the hundreds of people vying for your attention and the beads or throws. But that was nothing to the crowd inside the gates at the pavilion area. The amount of people cheering, singing and dancing blew me away.

One thing I especially enjoyed was trying to get the perfect photo. You see, I liked working during this event even though at the end of the day I was dog tired. I took more photos at that time and made it a point to capture as much fun as I could, be it excited kids on carnival rides, people jumping for beads, their fingers stretched out as the circle of beads nears their hand. There were people getting some sort of decadent food, the Budweiser Clydesdales, bands performing, colorful costumes, all of it.

Heck, I even remember before I started work here of bringing my kids to the parades. One of my boys actually caught the chicken at one of the early Courir du Mardi Gras events and me, not knowing what it was about, told him to let it go.

So many memories of fun times in downtown Port Arthur.

And though I miss the Port Arthur festivities I can always look to the ones in our neighboring town.

The organization moved the festivities to Beaumont a few years ago and the fun has continued. I look forward to making new memories there.

This year’s Annual Mardi Gras Southeast Texas will be held Feb. 24 to Feb. 27 in downtown Beaumont.