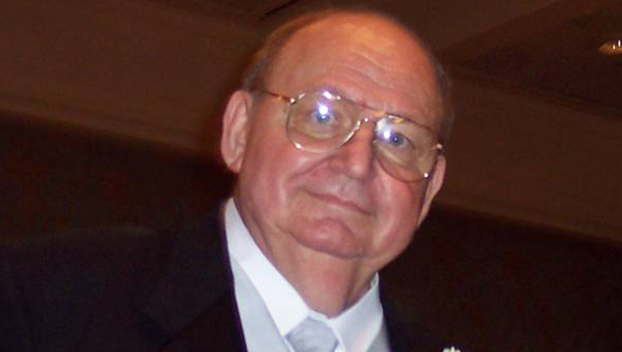 He was preceded in death by his parents, William Dewitt George, Sr. and Myrtle Mae (Kelley) George of Commerce, Texas; his brother William Kelley George, MD of Galveston, Texas and his son-in-law, Dean Cook, of Port Arthur.

In addition, he is survived by Maria Granados (Fito) and their children, of Nederland, Texas, who have become family to him and Mary Jean in recent years, as well as a number of dedicated and loving caretakers.

Dub graduated from East Texas State College in Commercein 1956, with a BA in Chemistry and Biology.

He graduated from medical school at The University of Texas Medical Branch in Galvestonin 1960.

After completing his residency in Internal Medicine at UTMB, Dub and his family moved to Port Arthur in 1964, where he began practicing medicine.

When he first came to Port Arthur, Intensive Care Units and CPR were brand new.
He helped establish both Intensive Care and Coronary Care Units at St. Mary.
He spent many hours teaching nurses and other staff the new skills that were necessary.
He had a deep concern for the welfare of the local area and spent many years working in community health.
He held numerous roles for the cities of Port Arthur and Beaumont, most notably, spending over 25 years working with the Port Arthur Health Department.

After a number of years in private practice, he became the director of the UTMB Family Practice Residency Program at St. Mary Hospital in Port Arthur, later also working with the expanded program at St. Elizabeth Hospital in Beaumont.

Additionally, throughout his career with the University, he continued to care for his private patients. In 1999, he retired from the University and returned to private practice.

He completed his medical career with Southeast Texas Medical Associates. (SETMA) He retired in December of 2020, on his 85th birthday.

Dub was involved in many community organizations through the years. He had been an active member of the North Port Arthur Rotary Club since the 1970s and was a past president of the club.Others he served with included the American Heart Association, the Mended Hearts organization, and the American Red Cross.

When his children were young, he coached youth sports through the Port Arthur YMCA and served on the YMCA Board of Directors.

He was also a member of the PTA at each school his children attended.

Dub had been a Ham radio operator since the 1950s and was a member of the Quarter Century Wireless Association. He became interested in computers in the 1970s, starting with one that he built himself.

He later built and repaired computers for his friends as “The Computer Doctor.” In later years, he became an avid amateur photographer and could frequently be spotted at events with the latest digital camera in his hand.

Befitting his passions for both technology and public health, Dub will be remembered at a virtual memorial service via Zoom at 4:00 PM Saturday, January 8, 2022.
To attend the virtual service, please contact Clayton Thompson Funeral Home for more information.
Viewing will be on Saturday, January 8, 2022 from 2:00 PM till 3:30 PM at Clayton Thompson.
Due to Covid concerns, the family will not be present during the viewing and they ask everyone to be safe and attend the virtual service if possible.
Private burial will be in Greenlawn Memorial Park.
In lieu of flowers, the family requests that donations be made to the Rotary Foundation or to the American Heart Association.
Clayton Thompson Funeral Home is honored to serve the family.
Online condolences can be expressed at ClaytonThompson.com