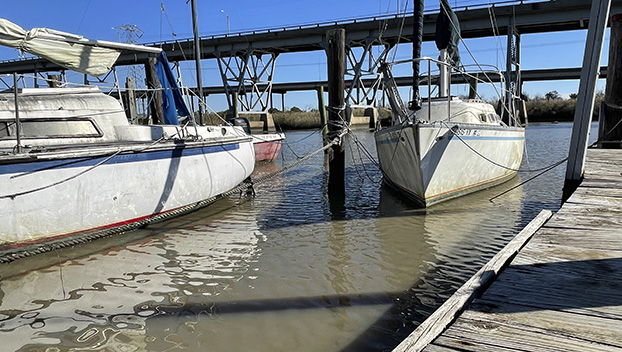 Those passing by waterways in Southeast Texas may notice lower-than-normal water levels. However, this is a common phenomenon associated with cold fronts and northerly winds.

“The day we had strong winds, levels went down really, really far,” said Andy Tingler, meteorologist with the National Weather Service in Lake Charles. “Even through we had a high temperature of 73 degrees, the cold front came through in the early morning hours Sunday and the wind switched from the north.”

“It was also breezy Monday and that just shoved all the water out,” he added.

Mic Cowart, port manager of the Sabine Pass Port Authority, said the loss of water was expected, but did drop as much as 4 feet on Monday. But Tuesday, it was closer to 3 feet.

“That’s typically this time of year so we were expected it,” Cowart said, adding it hadn’t caused a problem for larger ships coming into port. “For some of the smaller craft, it becomes very critical for pilots and other mariners to stay in dedicated channels or they can run into trouble.”

Tingler said Cameron Parish, which is not far from Pleasure Island, recorded its lowest water point since recording began decades ago.

While Southeast Texas has been on a warming trend, temperatures are expected to drop down near freezing by Thursday, according to the NWS.