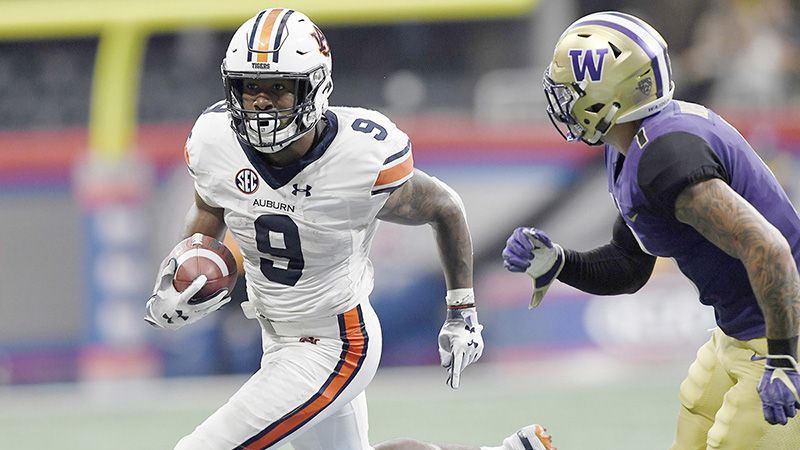 Auburn’s Kam Martin, from Port Arthur, rushes in the first half against Washington on Sept. 1, 2018, in Atlanta. (Todd Van Emst/Auburn Athletics)

In a year’s time, Memorial graduate Kam Martin went from sleeping in a car to keep warm to being in a position coach at Incarnate Word.

During the ice storm that inundated the state in February, Martin, a former Memorial running back,  rotated between sleeping in his house without power and sleeping in his car to get warm.

“It got cold,” he said. “I put on my letterman. I got so cold I got in the car and put on the heater for a little while and would go back into the house. At that time, I was just lost. I didn’t know what I was going to do. I knew I wanted to coach. I had opportunities to be a high school coach, but I was just waiting to see what other coaches were going to do.”

Prior to the freeze, Martin had been in contact with Gus Malzahn, who was the head coach at Auburn when Martin played running back. Malzahn told Martin he would have a spot on his staff for the running back when the next year started.

However, Auburn let Malzahn go, leaving Martin’s employment status up in the air.

“I was reaching out to all of my (connections),” Martin said. “I just stayed on my faith. I knew that something good was going to come. I know God takes care of his good people.”

During the middle of the freeze, the University of Central Florida hired Malzahn.

“I had reached out to Malzahn at like three in the morning,” Martin said. “He hit me back at like 4:30 (a.m.) and told me when he hires his staff, he would give me a call.”

Malzahn called Martin and offered him a position as an offensive assistant and recruiter.

“I am thankful for him giving me the opportunity at a young age,” Martin said. “I could’ve taken the route of being an NFL free agent. I knew that I wanted to get in this profession and kill it. I didn’t think it would happen so fast. I have my own (position) room at 24 years old at a Division I program. I am truly honored and blessed to have this opportunity.” 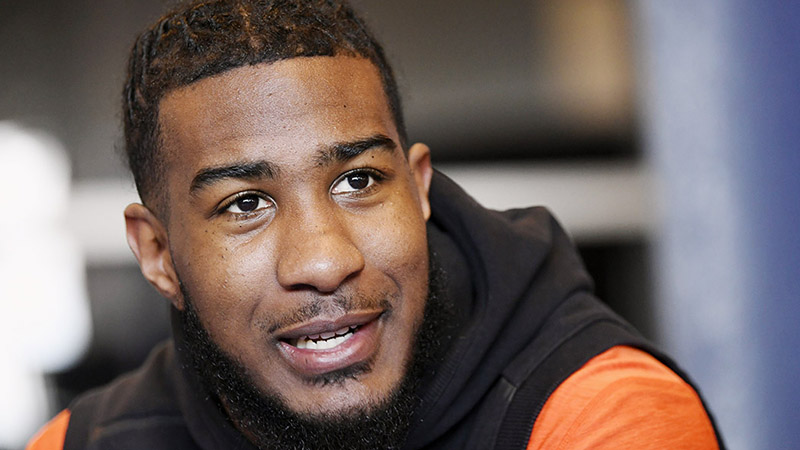 The running back said he believes his young age helps him connect with incoming college athletes.

“I was just being myself,” he said. “I had just got done playing, myself. I knew I could talk to them and be a mentor to those guys. I was just recruiting and helping out the running backs.”

Martin’s ability to overcome adversity didn’t just start as a coach. The former running back initially signed a letter of intent to play at Baylor until then-Head Coach Art Briles was fired. Martin had to wait several months to be released from his letter of intent before landing at Auburn.

“I knew God always had a plan for me,” he said.

Earlier this month, Incarnate Word selected UCF’s co-offensive coordinator G.J. Hinne to be the Cardinals’ head coach. While he only knew Martin for a year, he apparently saw enough to offer him the running backs’ coach job.

“It is crazy,” Martin said. “He just saw how people treated me around the office and how everyone had respect for me. I am a genuine dude. I treat everyone the same.”

One of Martin’s mentors, Memorial Track Coach Darrell Granger, said he is not surprised at his former runner’s quick success.

“He has always been a leader and had an ability to lead young men,” Granger said. “I know he is going to be a great coach over there. Now, he has an opportunity to give more kids from Texas the lane to be a college running back like he was.”

Martin plans to use all of his Texas high school football connections to give Incarnate Word the best opportunity to compete in recruiting.

“I am really in with a lot of coaches, trainers and 7-on-7 coaches,” he said. “I have a lot of Texas ties. I am a big Texas guy. I am honored and blessed to be back in this state. I am going to recruit hard and do my best to get athletes from that area to Incarnate Word.”

With his quick rise in a year’s time, Martin doesn’t put a cap on where he could be in five years.

“I see myself as an offensive coordinator or a head coach, or in the NFL coaching,” he said. “Those are the plans I have for myself. I know my faith in God. He is going to take me to places I have never been.”