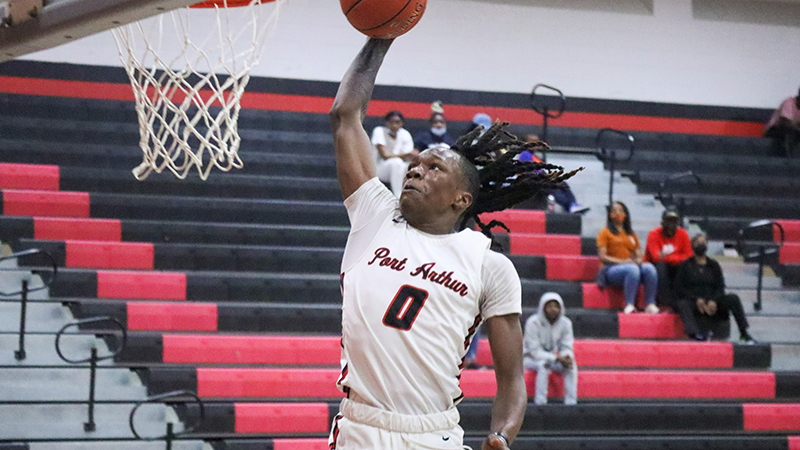 Memorial Head Coach Alden Lewis said his team looked like they were coming off a five-day break during the Titans’ warm-up game against Houston Austin in the James Gamble Classic Tuesday.

The eight-team tournament hosted by the Titans had a smooth Day 1 opening as teams played their way back into a rhythm from the holiday break. The Titans beat Houston Austin 64-43. 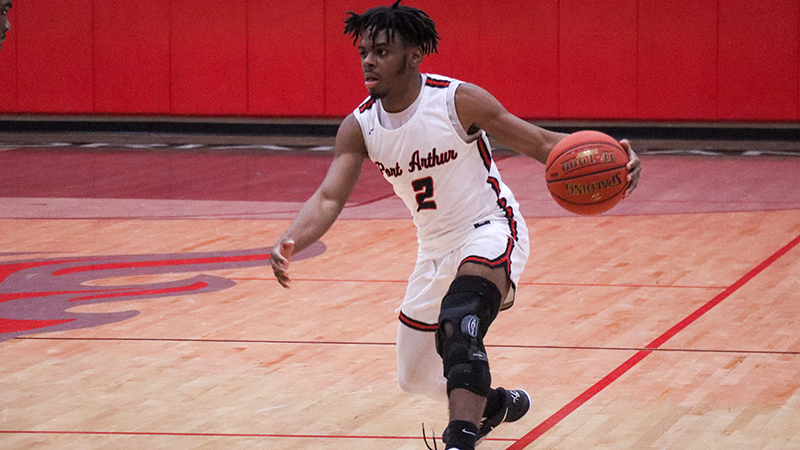 Memorial’s Jah’mar Sanders sports a brace during his first action since spraining his knee in the football playoffs. Chris Moore/The News

The Titans basketball team welcomed the soon-to-be college quarterback, who signed a letter of intent to play for New Mexico earlier this month, who said he had some nerves.

The point guard wore a brace on his healing knee.

“It felt good,” Sanders said of being back on the court. “I have been sitting in the house in the bed because of the knee injury, but I am back in action.”

Sanders had one day of practice before returning to action.

“I was kind of scared to move at first,” Sanders said. “But as practice progressed, I got better. I am back normal now. I have a little more work to do.”

Sanders, who came up short on a few shots early, is still working to get back in shape. He finished with five points.

“He is one day in from practice,” Lewis said. “We just wanted to get him in and acclimated. I wanted to get a few minutes here and there and get him ready for district play. He hasn’t played in a long time… He is a natural. He will be alright.”

The Titans were able to pull away in the second half, outscoring Austin 18-9 in the third quarter.

“I think it took a half to get out there and get going,” he said. “Once we got in the second half, we started playing a little bit more comfortable. They had more energy and effort, which we needed.”

Jordan Casmore led the team with 14, including four 3s. Ke’Andre Jones had the highlights of the day with a dunk in transition, followed by finishing an alley-oop on the following possession. The forward finished the game with nine points.

Day 2 of the Tournament tips off Wednesday at Memorial High School.