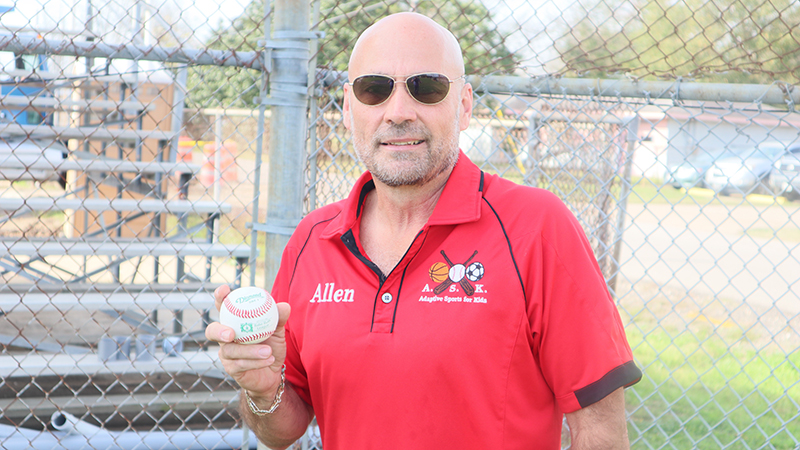 Nearly 18 years ago Allen Nation’s daughter was invited to play softball in Bridge City to play in a Challenger Division, which is bellow Little League softball. The division was designed to help children with more needs.

Seeing the promise of the division, Nation joined Scott Ferguson and, together, they grew the league to 50 kids.

“Nederland Little League invited us over to start their program, so we moved it over here,” Nation said. “We grew that, still under Little League, to 80-100. We only played like seven games a year. We had parents come to us and ask if they could do more. Ten years ago, myself, Scott Ferguson, Kerri May and Gay Ferguson decided to form a 501-C3 and named it Adaptive Sports for Kids (ASK).”

The organization’s first fundraiser was selling paracord bracelets at the art department in the City of Orange.

“We have grown the program,” Nation said. “Scott and Gay are no longer board members but they are actively involved. I am the executive director and Kerri is the president. We added many sports.”

The organization has sports year round.

At the end of October, the organization holds an awards banquet.

“Everyone gets dressed up,” Nation said. “We felt like our athletes needed that same experience that the high school kids get. We hand out certificates for every sport they have been in. We hand out male and female athlete of the year. That is actually named after (the late) Mayor Nugent and his wife. The Dick Nugent Award and Patsy Nugent Award.”

“Gay had talked to us years ago about it in general and they were looking for a new location,” Duque said. “She talked to me and Mayor Nugent about it. It hit home for him because of the difficulty with his leg. We fully embraced the idea, along with Angela (Fanette) with parks. They started out using the park for baseball. Then, they were using the open field for soccer and it kept growing.”

The program also has MVP awards for each sport.

“We try to hand out as many awards as we can,” Nation said.

This year, ASK added a new event that Nation wants to continue. In October, the organization held a fishing derby at Doornbos Park.

“The state filled the pond,” he said. “We had 62 kids register and we had 58 attend. It was a beautiful and successful day. We are going to try and include that in our events. We are looking for sponsors. We may team up with the United Way with that.”

Adaptive Sports for Kids was one of 13 local nonprofits to receive grant money from the inaugural Port Arthur News Season of Giving powered by Port Arthur LNG.

“If you have a diagnosis, you are eligible to play,” he said. “We charge nothing. There is no fee to play. We try to explain to parents, especially new parents, if they are running out in the outfield, that is OK. They are not really here to play baseball. Most of these kids don’t really get enough exercise. They sit in front of the TV. Out here, they meet friends and have play dates with one another. Parents get to meet and network and talk about doctors and medicines and help each other.”

Nederland Babe Ruth and ASK share the baseball field on Park Street. While at one of the events, Duque said he saw a child in a wheel chair struggling to get across the gravel parking lot.

“I started talking to Gay,” Duque said. “We were in a position with money to where we could make those parking lot improvements there and in Doornbos Park. We are already under construction… Mayor Nugent loved going out there and throwing the first pitch. It was a sweet thing to go see him do that. We want to continue the legacy that he started.”

Coaches react as redistricting could cause Port Neches-Groves and…