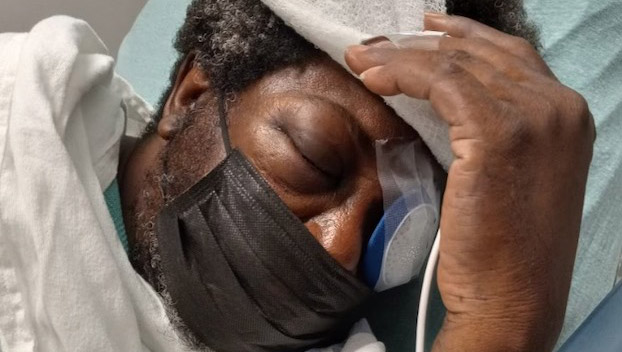 Woodie Blanks, 67, was attacked on the morning of Dec. 17 while he was delivering a newspaper to a regular customer. (Special to the American Press)

The American Press (Lake Charles, Louisiana) carrier who was brutally attacked last week has been released from a Shreveport hospital, but still faces a long road to recovery.

Woodie Blanks, 67, will have a different Christmas experience this year than usual after sustaining serious injuries from an attack last week while delivering a newspaper to a longtime customer.

“I’m feeling a little better today, it’s the first day that I’ve really experienced some improvement, but I don’t know if that will continue. I’m just trying to take things one day at a time right now,” Blanks said.

Blanks was the victim of an attack that occurred while he was delivering a newspaper to a regular customer the early morning of Dec. 17.

Blanks had previously been asked by the customer, an elderly man with health issues, to bring the paper to his door, rather than his mailbox. Blanks said it was something he did often and nothing was out the ordinary when he parked his truck, left it running and then bundled up before walking to the door with newspaper in hand.

At the door, the homeowner greeted him and the two engaged in a short conversation before Blanks turned and began walking back down the driveway to his truck.

At that moment, Blanks said two vehicles pulled up on either side of the driveway, one behind his truck and the other in front of it. He also noticed the men who exited the vehicles had turned off his own truck and removed the keys.

What Blanks did not know was the elderly homeowner had experienced prowlers on his property recently, and the men who approached Blanks falsely believed he was the prowler.

“They asked me what I was doing there. I told them I was delivering the paper, like I had been for the past three years. I told them to go ask the man, that he would tell them who I was. That’s when they blindsided me. One of them hit me and knocked me to the ground. They kept hitting me,” Blanks said.

The homeowner was eventually able to call the men off of Blanks, who said they gave him back his keys and allowed him to leave. He immediately drove away and called the Rosepine Police Department, reporting the incident.

According to detectives with the Vernon Parish Sheriff’s Office, two of the men were the grandsons of the homeowner. They have been identified as Douglas Paul James, 32, of DeRidder and Dillon Matthew James, 24, of Rosepine. They were each arrested on Wednesday and charged with second-degree battery.

Immediately after Blanks reported the attack, authorities called an ambulance for his visible serious injuries, and he was transported first to Beauregard Health in DeRidder and then to Shreveport where he underwent surgery on both eyes.

Blanks still has a great amount of swelling in his face. Some teeth are loose, his mind is “foggy” at times, and his vision is blurry in his right eye. Things are much more serious in his left eye. Doctors were forced to partially remove the pupil from Blanks’ left eye, and it remains undetermined if he will ever regain vision in that eye.

“Christmas will be a little different this year. I won’t be able to see it the way I have in the past, but I’m still going to enjoy it,” Blanks said.
His fiancé, Barbara Armour, said it has been “rough” watching Blanks endure the trauma and pain, but she remains dedicated to helping him focus on making a full recovery.

“I am his eyes now. I’m helping him make his appointments in Shreveport and I’m doing what I can for him. We are hoping that as the swelling goes down in his eyes that maybe there will be some hope of his full vision returning,” she said.

Throughout it all, Blanks refuses to lose his positive outlook on life even after the attack, calling it a “bad moment’ but not one that will change his feelings on helping others.

“No way will this change anything for me. I was just trying to help someone, and that is what I have always done. I’ve had people who were dependent on me that I looked out for, now helping me and looking out for me. I feel blessed actually,” he said.

As news of Blanks’ attack spread, people across the region have offered their support for Blanks with donations to assist with his medical expenses.

Blanks said hearing of the outpouring of support has given him “a good feeling.”

“It’s a good feeling to hear that people I don’t even know want to help me,” he said.

The American Press has set up a GoFundMe account at https://gofund.me/f29e2f4b to help with Blanks’ medical bills.

The Port Arthur News is also accepting donations at its office, 2349 Memorial Blvd. in Port Arthur.

— Originally published in the American Press and written by Pamela Sleezer.