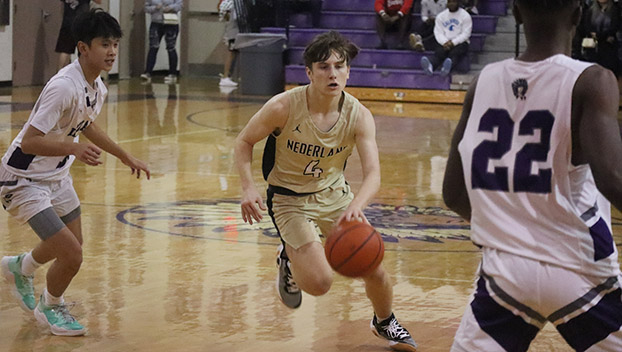 Nederland’s Ethan Borel drives the lane in the first half of the Bulldogs' win over PNG. (Chris Moore/The News)

Both teams head into the holiday break with different feelings as the Bulldogs walked out of PNG High School with a 50-22 win over the Indians.

Nederland outscored the Bulldogs 18-2 in the second quarter and 10-2 in the third quarter.

“It was really important,” Nederland Head Coach Brian English said of the win. “Five days to think about a loss is not much fun. I have been there before. It is just one of those things. We can’t sit around for five days. Some kids will, but I don’t think these kids will. We will be ready to go after the holidays.”

The Bulldogs put together one of their best defensive performances of the season, led by guard Ethan Borel. The senior scored 10 points, all in the second quarter, and PNG point guards felt his on-ball presence.

During a run by the Bulldogs in the second quarter, Borel stripped the ball handler on back-to-back possessions and raced down the court for easy layups.

“I am real proud of the kids,” English said. “Our defensive effort was super. We played good defense this year. We had some lapses, but tonight, we really got after it.”

Chase Hefner led all players with 15 points, including three 3s.

“We didn’t have to do much as coaches,” English said. “All of the credit goes to those guys. They are seniors and wanted this for a long time.”

“That is really demoralizing,” PNG Head Coach Chris Smith said. “Our kids did a great job of getting people out here. Our fan base is really good. For us to play like that, I just want to apologize to them.”

For the Indians, the break will feel a bit longer, Smith said.

“That is the best thing right now for us,” he said. “We have a five-day dead period with UIL. It is good for everyone to be with their families. We have been stuck together with tournaments. We need the break. We are going to come back recharged and I have all of the faith that they are going to do a great job coming back.”

Nederland resumes district play against Beaumont United Dec. 31, but will play in a tournament next week, starting with Grand Oaks Spring.

The Memorial Titans started their district season with a 45-43 loss to Barbers Hill in Mont Belvieu Tuesday.

The Titans will host the James Gamble Classic next week at Memorial High School. The eight-team tournament begins Tuesday.