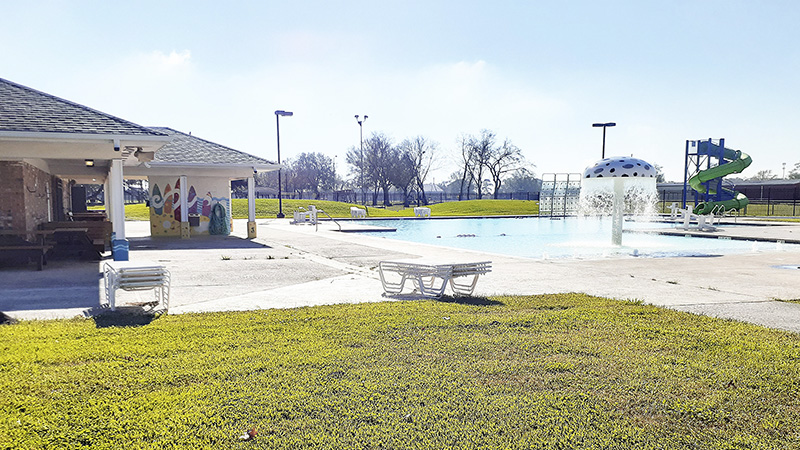 The City of Nederland is looking to execute a major deck upgrade at the Nederland Swimming Pool to fix a series of trip concerns and other hazards. (Stephen Hemelt/The News)

NEDERLAND — Upgrades to the City of Nederland swimming pool decking have been delayed again, possibly pushing the project back to a fall-of-2022 start at the earliest.

When the pool was renovated, City Manager Chris Duque said only certain sections of the deck were repaired, which left much of the original deck.

Now, much of the original deck is in poor condition, creating trip hazards and other safety issues, he said.

Improvement funds were included in the 2020-21 fiscal budget, but the decking upgrades were delayed by the slow progress of the city’s recently installed $150,000 water slide. Avoiding construction compromises with the pool season also limit the window for upgrades.

The city opened bids for the project last month but only received one and determined it was incomplete, necessitating a project rejection, when the drainage component was not featured in the contractor’s proposal.

Parks & Recreation Director Angela Fanette said a drainage focus is a must.

Mayor Pro Tem Talmadge Austin asked how the city would approach securing more contractor interest and was told the use of an engineer and a more drawn out time frame would “hopefully” bring in more bidders.

“We will have to possibly place cones or mark other areas for potential safety and trip hazards but will still continue to have the pool season in the summer.”

Duque said rushing a rebid this week would push construction into June, which is the pool’s busiest month.

“It just makes sense to postpone until after Labor Day and we’ll have it done next fall,” Duque said.

On Tuesday, Duque said there is a possibility of completing the upgrades before the pool season opens in 2022, but any timeline is still being discussed.