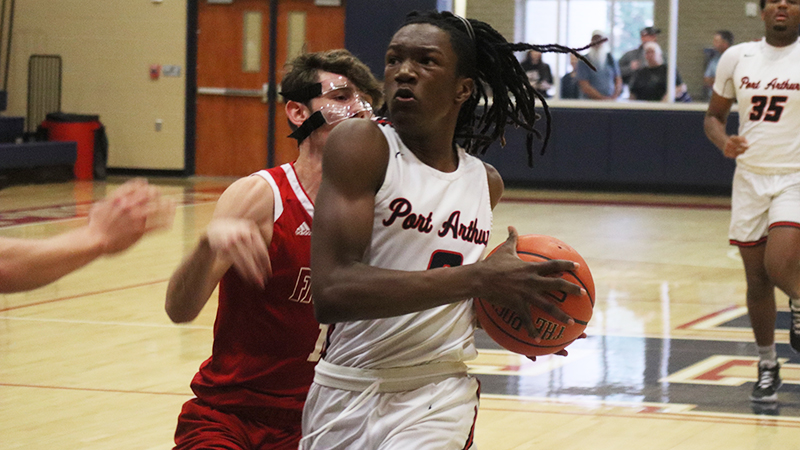 Ke'Andre Jones drives for a layup during a tournament in Sour Lake. Chris Moore/The News

After a year off due to the pandemic, Memorial High School will be home to the James Gamble Classic next week.

Memorial will be joined in the tournament by five 6A teams, one other 5A team and a 4A squad.

All games will be played in the competition gym.

The Titans, who are a 5A team, share the court with 6A Aldine, Eisenhower, CE King, West Brook and Alief Taylor. Fellow 5A Houston Austin and 4A West Orange-Stark will also be in Port Arthur.

“We didn’t have it last year, so we are just trying to get it back going again,” Memorial Head Coach Alden Lewis said. “We limited it to eight teams, but we are trying to make it as competitive as possible. We don’t have any of the teams coming back from the last time because of COVID. We are getting it back this year and hope to continue to build it back up to how it normally is.”

The Titans have won six out of the last seven and nine James Gamble Classics overall. Lewis said winning the tournament isn’t his team’s end goal, but added it would be a good experience.

“That would be another stepping stone to one of our goals for the season,” he said. “It is one of those small, short-term goals we can accomplish if we have a chance to win it. I think the way we have been playing and coming along, we have a pretty good shot to win it.”

Memorial Athletic Director Brian Morgan said the tournament is always fun because it showcases teams are from the region.

“A lot of teams come because of Coach Gamble, more than anything,” he said. “It is a high-quality tournament. It is always good to see some of those teams play… It says a lot about what Coach Gamble did throughout his time and when he coached at Lincoln.”

This year, some of the participants have connections to Coach Gamble and Memorial.

The Titans will continue their district schedule after the tournament, but Lewis believes the classic will help keep the players sharp over the winter break.

“They will have a five-day break after the first district game and then the James Gamble Classic,” he said. “I think that will be a good lift for us before we go into our second district game.”

Memorial will return to district play Jan. 4 with a home game against Galena Park.