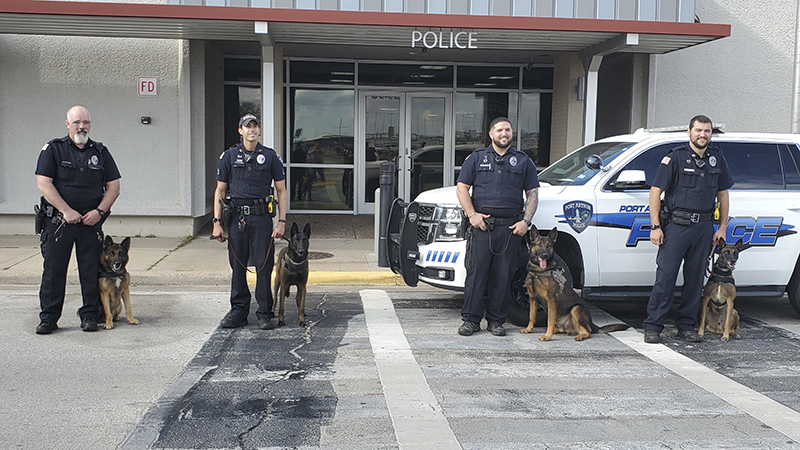 When a suspected criminal ran from police and tried to steal vehicles from people sitting at a red light, Remy and his handler leapt into action.

Remy, a Belgian Malinois/German Shepherd mix, is a K-9 with the Port Arthur Police Department, where he is paired with Officer Ashton Moss.

“When I arrived with my dog, I gave (the suspect) a bunch of warnings to give up and he didn’t and I sent my dog,” Moss said from inside the department’s training room this week.

The suspect tried to jump on top of a car, Moss said, and Remy followed and pulled the man down.

PAPD has a long history of working with canine counterparts. Decades ago there was a team who handled bloodhounds. Currently the handlers have Belgian Malinois, one has a German Shepherd and Moss has the mixed dog.

Officer Chad Morrison, Officer Chad Whitehead and Moss have had their share of success stories with their K-9 partners.

Morrison, who is paired with Spok, said he was trying to track a person and was able to use a technique taught to him by Whitehead. To track the man he was pursuing, Morrison created a scent article.

It was at night when he and the K-9  tracked the suspect approximately four blocks. The scene led them to a house where the man had been and left.

“It was successful because (the K-9) was able to go from Point A to Point B,” Morrison said. “I was extremely excited. The first thing I did was to blow (Whitehead’s) phone up. It was cool to see it unfold.”

A lot of work goes in to making the partnership work.

“You put in so much time and effort, and these dogs are your partners,” Whitehead, who has worked around dogs for 23 years, said. “You’re with them every day, you bring them home, you do everything with these dogs, so you’re very proud of what they do — especially when you put that kind of work and you put that kind of time in to them.”

Whitehead had a similar success story to those of the other two officers, in dealing with a case of a vehicle stolen out of the city of Groves.

Officer Edwin Linarte, an eight-year veteran officer, is new to being a handler. His K-9 Reus is a Belgian Malinois and the partners are in the process of bonding. 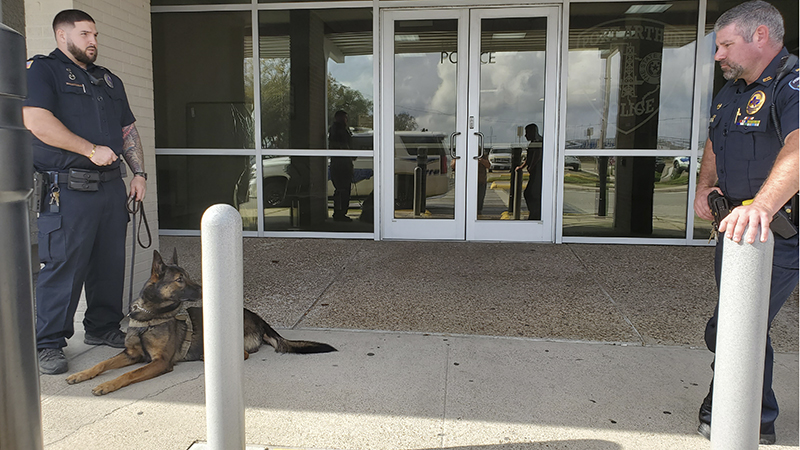 A lot must be done for the handler-K-9 partnership to be successful. This includes bonding with the dog and building a relationship and discipline, Whitehead said. Then comes basic commands, training and, after this is done, the two go to school for certification.

The dogs stay with the handler 24/7 except in certain instances when the dog is not allowed to go. The dog doesn’t socialize with anyone except the handler and his family — not even with other officers.

In addition, the K-9s are taught commands in several languages.

Lt. Matt Bulls, who is over the K-9 division, explained some of the work the dogs do.

Narcotics is an issue in the area, and the K-9s are used when officers serve narcotics search warrants.

The K-9s also assist Groves and Nederland police in searches and other agencies when a K-9 isn’t available or the agency doesn’t have one.

In one instance a PAPD handler and K-9 were sent to assist Groves Police at the former renaissance hospital, where two men were reportedly stealing metal.

PAPD’s K-9 Unit will be receiving a bloodhound in the future, and Whitehead will be the dog’s handler. His K-9 Judge is nearing retirement.

When the time comes for Judge to hang up his vest, Port Arthur City Council will adopt an ordinance in order to retire the dog. This gives the officer/handler the right to keep the dog as his own and be the family pet for the rest of his life.

“He’ll retire to a good home and chill the rest of his time,” Whitehead said.