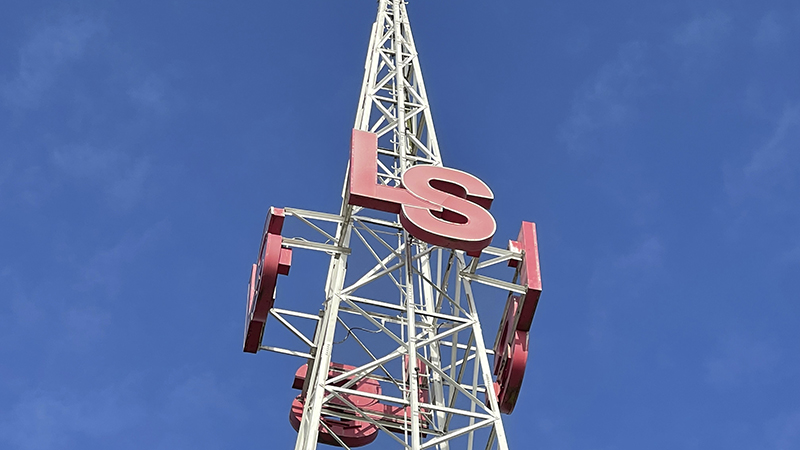 If you’ve been on the Lamar State College Port Arthur campus, or anywhere near, you’ve seen the large metal tower with the initials LS attached to the top.

The radio tower, built in 1909, is no longer in use. But this week I learned at one point, it was instrumental to a neighboring town suffering from their second devastating hurricane in less than 20 years.

In 1900, Galveston Island suffered from the worst natural distaste in U.S. history when a hurricane unexpectedly came through and blew down most everything and everyone in its way.

From that came the seawall, but even that didn’t offer much protection in 1915, when another hurricane came through and devastated the island.

But the help that came after would not have been possible had it not been for that metal tower in Port Arthur.

The story was told this week by Dr. Ben Stafford with LSCPA, so I’m going to let him tell in his words what followed the Spindletop Gusher of 1901:

So in 1909 we were founded and began to create the techniques that brought this nation into the petrochemical area. In 1909 our founder met a gentleman traveling in the United States, a foreign gentleman, they became very close friends because George Gates was fascinated with anything to do with science.

The year he founded the college this gentleman actually traveled to Texas with him and brought some of his equipment. And right down the street from us — you can see it when you leave — is a very large tower. That is the Marconi wireless tower, built on this campus in 1909.

Let me take you back in time to the year 1915. Think about a very hot summer. Think about Galveston, Texas. In 1915 one of the worst storms in the history of our state struck that island. Ninety percent of the housing that was not covered by the seawall was immediately destroyed. The housing that was covered was flooded. Hundreds of people were already dead and there was no way to get a message out for help. But in the harbor was a steamship.

The ship was named the Concho. The Concho was an experimental ship, and it was equipped with a Marconi wireless set. While the storm was still going, the Concho was too damaged to leave harbor, but it was sending out a constant SOS. And a group of students and a professor on that tower right down the street answered the call. Before the storm was finished, that tower was sending requests for help all across Texas.

For days after the storm, that tower was the only lifeline there was to Galveston Island. We couldn’t send the call to Houston. Remember, in 1915 that hurricane did more than $1 million in damage in Houston and in 1915 $1 million was a lot of money. So calls were going out to Dallas, to Austin and all over Texas; and reinforcements were coming here to help with the needy on the island.”