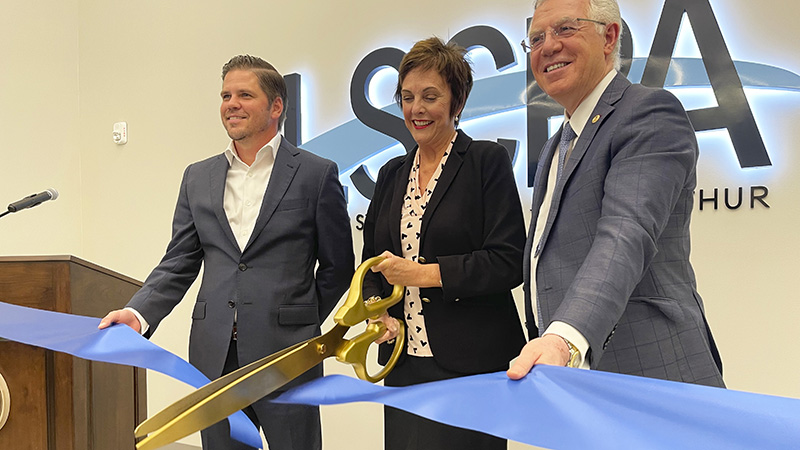 Lamar State College Port Arthur received a $500,000 planning grant as it spearheads the efforts of a regional coalition that could result in nearly $80 million to help bolster the area’s pool of trained nurses.

LSCPA and its partners from Southeast Texas and Deep East Texas are one of 60 finalists from across the United States in running for part of the U.S. Department of Commerce Economic Development Administration’s $1 billion Build Back Better Regional Challenge.

The EDA investment would address the nursing shortage within the region’s healthcare service area. The grant would enhance specific facilities to allow for advanced nursing education and open others for nursing clinical placements for the first time.

“There is an incredible shortage of nurses in the region,” Dr. Ben Stafford, Vice President of Workforce Training and Continuing Education at LSCPA, said. “Local hospitals are scrambling to fill openings and the demand just continues to grow. This grant would provide more opportunities for training and education and help alleviate that shortfall.”

The grant proposal is one of two in Texas to receive the $500,000 planning grant, selected from among 529 initial applicants from across the United States. The University of Texas at El Paso is the other Texas finalist.

It is expected that at least 50 percent of the 60 finalists will receive $78.9 million each. Deadline for completion of the planning phase is March 15.

While some of the funds will be expended on construction projects at the non-profit entities involved, two for-profit hospital groups are also participating:

LSCPA will build a new allied health building on land it owns to enlarge the numbers of students admitted to Nurse Aide, Licensed Vocational Nursing, and Registered Nursing programs. In addition, LSCPA is committing to nearly $600,000 in salaries for new positions for the enlarged programs.

Lamar State College Orange will renovate an existing building for nursing education. New space will be used to create a free-standing RN program and increased enrollment capacity in existing programs. LSCO is dedicating nearly $200,000 in salaries for new positions.

Lamar University is proposing renovation and addition to their nursing education facility which will allow a significant increase in admissions to the bachelors and masters nursing programs as well as creating a Doctor of Nursing Practice program. LU is committing to more than $700,000 in salaries. Lamar will also employ a business counselor to work specifically with nurses who want to start their own business to help those people understand any benefits to which they may be entitled.

The Deep East Texas College and Career Academy is proposing renovations to an existing building to enlarge its nurse aide program.  LSCPA will partner to create the only LVN training program in Jasper and Newton counties.

Baptist Healthcare will create a new program in psychiatric medicine and enlarge emergency services and general medical space. Grant funds will incorporate nursing education throughout the campus including classrooms near units and unit-specific simulation laboratories.

Christus will create a new four-story medical tower at its Beaumont facility with new space for intensive care and emergency medicine. Grant funds will be used to incorporate nursing education features throughout the tower, including rooms dedicated to education, simulation laboratory, enlarged nursing stations, and additional computers at stations to allow for training.

In addition to the proposed building plans, LSCPA is partnering with Riceland Healthcare and the Medical Center of Southeast Texas in creating new clinical rotation spots for nursing students with agreements to hire local graduates for the nearly 500 available nursing positions in the region.

All four hospitals involved in the coalition will join together to create a student debt forgiveness program for nurses they hire who commit to remain in the area for five or more years.

The BBB Regional Challenge is part of a suite of American Rescue Plan programs developed by the EDA to equitably distribute its $3 billion allocation to assist communities nationwide in their efforts to accelerate economic recovery from the coronavirus pandemic and build local economies that will be resilient to future economic shocks.

“This would represent the largest grant ever procured by Lamar State College Port Arthur,” LSCPA President Dr. Betty Reynard said. “The incredible opportunities this would provide are tremendous and widespread and will impact our region for years to come.”