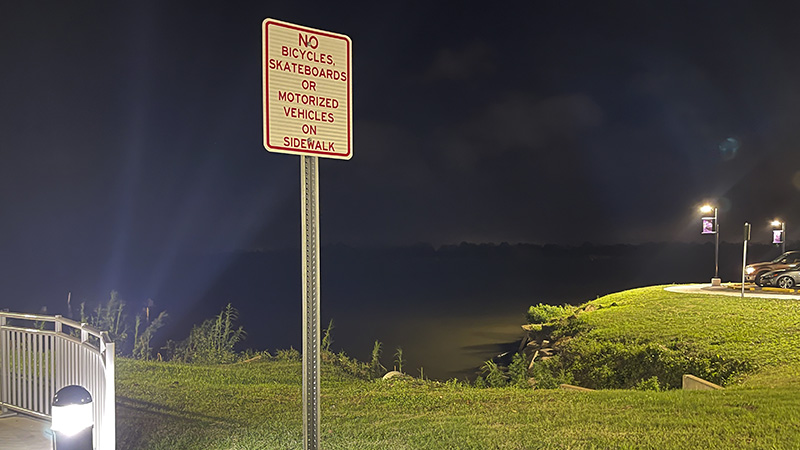 PORT NECHES — Mayor Glenn Johnson has a message for those who have been vandalizing parts of the Port Neches riverfront: You will get caught.

Johnson said the acts have been relatively small in nature, such as people kicking over lights or messing with the fence. But, the mayor said, it’s “ridiculous” the area can’t be developed without vandalism.

“We’re watching and we have zero tolerance,” Johnson said. “If you vandalize, we will prosecute. If you’re a child, we’ll prosecute the parents.”

Police Chief Paul Lemoine said most of the mischief that’s occurred has been away from the restaurant in the underdeveloped area.

Acts have ranged from people breaking spindles out of the railing to pulling the tops off of the sidewalk lights.

Last Saturday (Dec. 11) someone climbed on top of the pavilion and put a Rudolph reindeer on it.

“But people are good about calling if they see anyone acting a fool,” the police chief said.

“As the Riverfront develops, I expect less and less of an opportunity for people to vandalize,” Johnson said. “If you’re going to vandalize, go somewhere else. Don’t vandalize in Port Neches.”

Riverfront development kicked off in 2014 with the opening of Neches River Wheelhouse. Since then, plans for several new restaurants including Iguana Joes, have been announced.

The restaurant that first opened in Mont Belvieu in 1996 and has added multiple locations in the Houston area first announced intentions to build a 24,000 square-feet restaurant in Port Neches in 2019. However, they soon after faced a setback from the pandemic, and are now dealing with the global increase of building supplies.

But Johnson said the owner is collecting bids for construction.

“He’s getting bids from local contractors as well, so that’s very important,” Johnson said. “And that was his idea. So hopefully by the spring we’ll see some action there.”

Riverfront development has been a key movement for Johnson in his 20 years at the helm of the city. Earlier in his tenure, the then-council worked on ways to expand in a city that was landlocked, which included rezoning certain parts of town and utilizing the land near the river as a major attraction.

“We made lemonade out of lemons,” he said. “We didn’t want to jeopardize the idea that we are a bedroom community, so we wanted to find something that complimented our lifestyle.”

This year, a sidewalk, benches and lighting were added to the area to make it more accessible for people who wanted to be near the river at night.

Johnson said the city is in talks with other developers, and more announcements regarding the riverfront could be made in the near future.