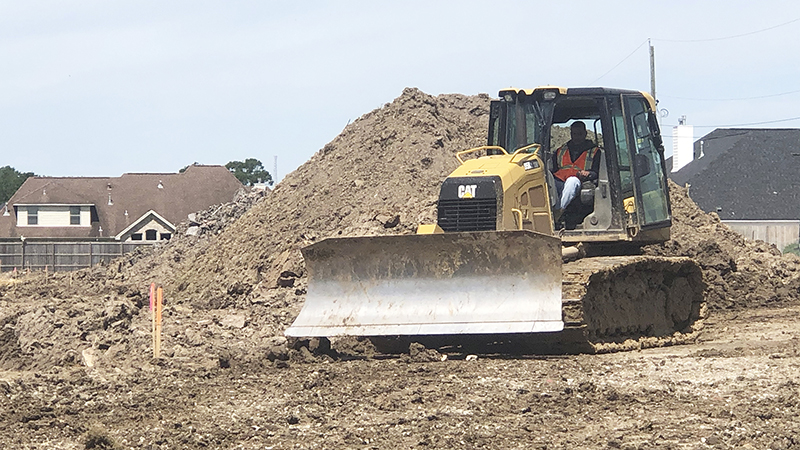 Cadence McShane Construction works in April on the Port Neches site that will soon be the new 3rd-5th grade campus. (Monique Batson/The News)

PORT NECHES — Despite grappling with a universal increase in costs and shortage of building supplies, officials with the Port Neches-Groves Independent School District school construction would continue on schedule as expected.

Gary Whittle, project manager with architecture and planning firm CBRE, addressed trustees at the district’s monthly board meeting this week to give an update on the $130 million bond issue approved by voters in 2019.

“It’s been just over two years…since the tax payers approved this bond,” Whittle said. “A lot has happened in that time — both within PNGISD and outside of PNGISD. We’ve had some successes in the bond; we’ve had some challenges in the bond.”

The current challenge, Whittle said, is the increase in the cost of building materials, as well as the challenge obtaining them.

Due to the pandemic, the price of lumber reached an all time high in May, according to information from the Associated Press. While costs have since dropped, they’re still at least 10 percent higher than they were this time last year. The cost of steel, however, increased 22 percent over the course of the year.

“We received word over the summer that some of our structural steel was sort of getting kicked back into the production line because when the mill started producing steel, a lot of the major global players that have a lot deeper pockets than we do paid to move their product ahead in the line,” Whittle said. “Amazon is a great example. Amazon is building stuff all over the country, and they’re paying extra to get their materials out the door quicker.”

Because of such issues, he said, two manufactures informed the district they could no longer hold previously quoted prices.

PNGISD fronted $750,000 to obtain materials now, which are being stored in various units secured within the district.

“I know it sounds like a lot of money — $750,000 is a lot of money,” said Superintendent Dr. Mike Gonzales. “If we had done something different trying to pursue other contractors, we may have reduced the cost by a few hundred thousand dollars. It was still going to be about $500,000. But our schools were not going to get completed on time, and our plan was to look into other areas to house our students.”

That alone, he said, would have cost up to $400,000 to prepare facilities that would no longer be used once the new schools were built.

“The good thing is we had this in contingency,” the superintendent said. “We had put money aside to make sure we had enough money, and we had money set aside in case something like this happened. Luckily we put quite a bit of money aside.”

Ridgewood and Woodcrest elementary schools in Port Neches, and Taft and Van Buren elementary in Groves, would merge to create one pre-K-2nd grade campus in each city. Students currently enrolled in pre-K at West Groves Education Center would attend one of the two.

Whittle said the estimated cost to build the facilities was less than projected, adding to the district’s savings.

“Our projects originally came in under budget, and within that budget we had some contingency,” he said. “We always set aside contingency, both in our budget and in our schedules to allow ourselves some slope.”