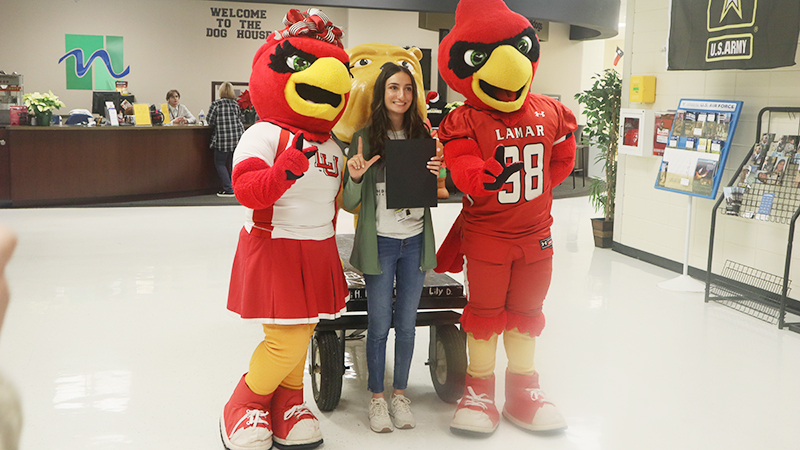 NEDERLAND — A Nederland High School student was one of two seniors in the state to earn the Presidential Scholarship from Lamar University.

During class time Tuesday, Lamar President Jaime Taylor got on the intercom at NHS and announced Rima Shaaban as a scholarship recipient.

Shaaban told Port Arthur Newsmedia she instantly started crying and froze, even though the announcement requested she come to the office. 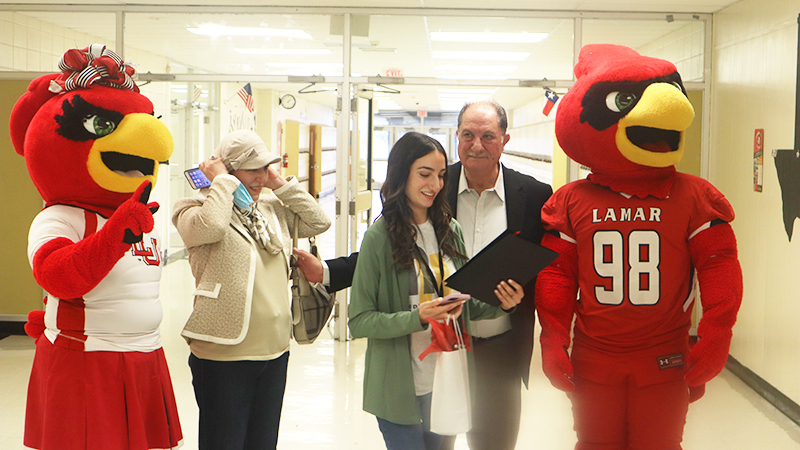 “At first, I was confused because I thought the results were coming out in February,” she said. “Then I really wanted it to be me because I worked really hard for this. I started praying, and then they said my name. I was caught really off guard.”

After her teacher encouraged her to go to the office, Shaaban was met by the Lamar mascots in the hallway, who led her to her parents and school administration, waiting applauding her.

Shaaban and her family moved to the United States from Syria in 2011. She is fluent in English and Arabic and also can speak Spanish. Her talents aren’t just limited to academics. She also played on the Nederland tennis team. 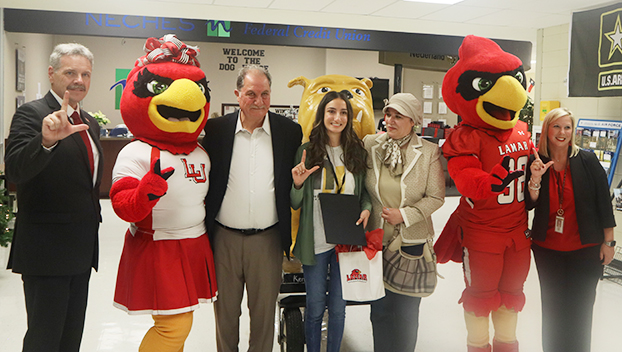 Taylor said he was excited to be able to present the scholarship.

“This was very special. This was the first time I have been able to present one,” said Taylor, who was sworn in as LU president earlier this year. “There were 170 applicants, and we have only accepted two so far. There are only going to be four out of the entire state.”

Taylor said Shaaban will fit in with the high quality of academics at Lamar.

“I have been stunned since I have gotten here,” he said. “I don’t think people in the region really appreciate how good of a university this is.”

After the presentation, Shaaban spent time talking with her parents and teachers, who were there to congratulate her.

Hunter Faubion, who is a teacher at NHS, wrote a letter of recommendation for Shaaban.

“Rima’s positive attitude and character are infectious to those around her,” he said in the letter. “She is a self-starter, and nothing stops her from completing a task or goal she sets for herself. Rima is always generous with her time and talents and always looks for a way to make an impact. This is evident when she helps an elderly neighbor by cutting the grass, or aiding the community doing hurricane-relief work or collecting food for needy families during Thanksgiving. Rima has a heart of gold and will be deeply missed when she graduates.”

Shaaban wants to major in chemistry. According to NHS, Shaaban holds a 4.0 GPA and will graduate in the top 1 percent of her class in May.