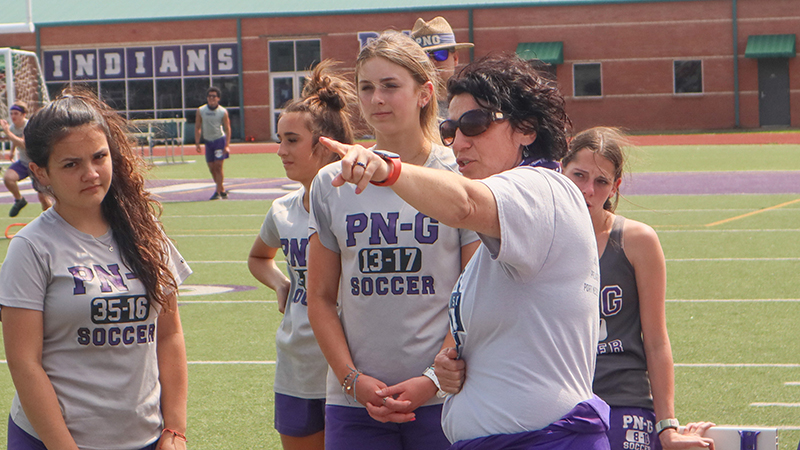 PORT NECHES — The Port Neches-Groves girls soccer team understands there are high expectations for the program. The Indians have won 11 out of the past 13 district titles.

While PNG graduated three senior starters last year, this year’s 12th graders are ready to step into the leadership roles.

“Ever since we were freshman, that is how it has been,” senior Emma Zumo said. “We have looked up to seniors over the years.”

Fellow senior Rylee Miller said losing last year’s seniors were a big loss, but they are taking the lessons and passing them on.

“We learned how to lead the team and how to bring the energy,” Miller said. “I think we are doing a good job so far.”

Head Coach Aimee Bates lets her players dictate the team’s goals for the season. The tactic was one she learned in training.

“It was about 6-8 years ago,” she said. “It was all about seeing what your kids want. Do they just want the fun journey? I have been lucky that all of my teams are driven, want to be hungry for a district championship and we have matched that intensity.”

Bates said the standards are set by the players at the beginning of each season with a goal meeting.

PNG has four seniors, and they are all starters, which is rare.

“That never happens,” Bates said. “We have Emma Zumo, who has played varsity for years and been in the back, but moved up to an attacking position. Morgan Coates is a senior. Rylee Miller is starting center back. Our back line is all back. I just moved it around a bit.”

Coates said her personal goal for the season is to be better than last year and show she learned from past experiences.

“We only allowed 12 goals last year and I just want to stop all the goals,” she said.

The Indians are returning seven starters from last year’s squad that made it to the third round of the playoffs.

“We have a couple of impact freshman that will see the field this year,” Bates said. “Ava Zumo and Rowan Faircloth will play on varsity. Rowan was a goal scorer in our first scrimmage against West Brook.”

PNG will scrimmage against Vidor and Kelly Friday. They will also scrimmage former PNG players in an alumni game Dec. 28 and play Lumberton on Dec. 30.

PNG will play their first game in the Waller tournament at he beginning of the year.

Bates said this season is the first time in several years that teams are allowed to play scrimmage games as early as December.

“It is great, because it allows you to try new lineups,” Bates said. “You have an idea of where girls can play but you see and it helps you to put those puzzle pieces together.”