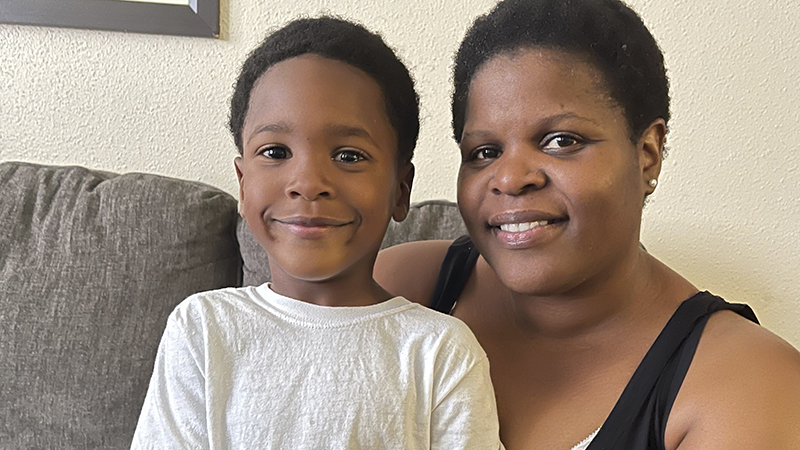 LaTisha Montgomery has found herself struggling with depression and anxiety for the last two months. Her son, J-Kaeson Babino, has been showing similar signs as well, she said.

While polite and full of smiles in person, the 5-year-old has reverted to former habits, like occasional bed-wetting. And he will no longer sleep in his own room.

Both say it began Oct. 13, when the kindergartener was allegedly choked by his school bus driver.

“I work seven 12s,” said Montgomery, who does construction at a local refinery. “And people are telling me not to feel guilty or not to feel bad about it, but I kind of do because I did trust these people.”

Babino was in his third year at Tekoa Academy, having gone through two years of pre-K before starting kindergarten. And he enjoyed riding the bus because friends from his apartment complex rode with him.

That, the child said, is what started the events that were ultimately reported to police.

Babino was sitting and talking with friends. For what he believes was the noise level, he was moved to another spot.

“I started crying because he moved me to another seat,” the child said. “And then he got up and he was walking to me. Then he choked me.”

Montgomery said she was initially unaware that anything happened. She had come home from work early that day, feeling unwell, and greeted her son at the bus stop somewhere between 4 and 4:30 p.m.

“I got J-Kaeson off the bus and asked, ‘How was your day?’ And he just had a look in his eyes,” she said.

Not long after, she received a text from a neighbor whose daughter said Babino had been choked on the bus.

She asked her son about it, and he confirmed the neighbor’s story.

While her initial response was to call the police, Montgomery said she first called the school and spoke with the principal, who apologized for any misconduct and said the matter would be handled.

“What really hurt me was when something told me to get up the next morning…and I went to that bus stop just to see if he was going to be driving that bus,” the mother said. “And he was still driving the bus.”

Babino wasn’t with her. It had already been decided he would no longer attend that school and is now in kindergarten at Hillcrest Elementary in Nederland.

A document obtained by Port Arthur Newsmedia from the City of Port Arthur shows a felony charge of Injury to a Child was filed at 7:56 p.m. by a person who lives in Montgomery’s apartment. While a large amount of the details including names are redacted and a full report was not released due to an ongoing investigation, the report says a police officer spoke with someone who wanted to press charges against a bus driver in relation to a choking incident.

Cory Kneeland, intake chief with the Jefferson County District Attorney’s office, said they received the case on Nov. 13 and it is currently under review.

“It has not been dismissed,” he said.

Montgomery said she has not heard back from the police since filing the report; but did hear from a Child Protective Services caseworker, as she reported the incident to them as well.

The caseworker, she said, told her he reviewed video footage from the bus and called it “horrible.”

On Friday, Kent John, a legal representative of Tekoa Academy, said he too had reviewed the footage and found no evidence of abuse.

“I did an independent evaluation of the incident,” he said. “That video has been turned over to police.”

For now, Montgomery is waiting for answers while still working through the reported incident.

“We’re going to get him counseling,” she said. “I may take a couple of sessions myself.”