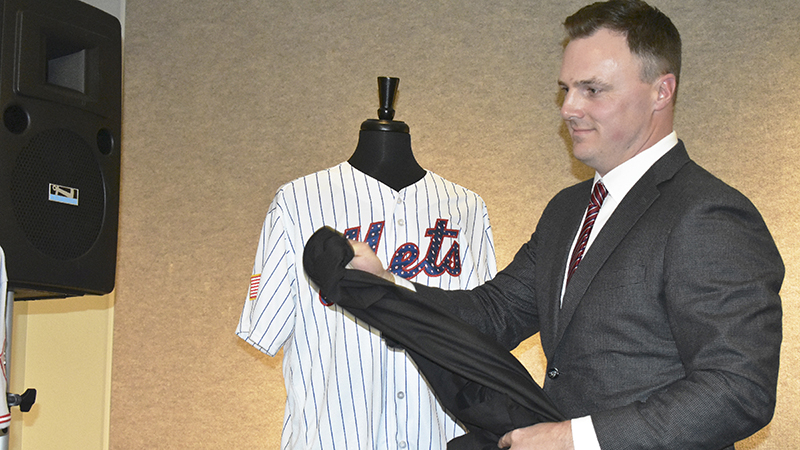 Jay Bruce unveils one of his uniforms during his induction. (I.C. Murrell/The News)

Jay Bruce, who played 14 years in the Major Leagues, purchased Sure-Shot Game Calls, according to a release.

“Sure-Shot has been part of the fabric of the hunting community of Southeast Texas for more than 60 years, and I’m really excited to become part of the brand’s legacy,” Bruce said. “My main focus is to maintain the elite craftsmanship of our products while introducing the brand to the next generation of hunters.”

Bruce, who graduated from West Brook in Beaumont, was a three-time All-Star and two-time Silver Slugger Award winner.

He is also a lover of duck hunting, which led him to the store.

Sure-Shot is one of the oldest game call companies in the world and has provided products for more than six decades.

The company said Bruce continues the legacy of their products and is already developing new calls set to be released next year. Bruce will also revitalize the brand with an updated logo, website, apparel and headwear, the release said.

Executive Manager for the Groves Chamber of Commerce Ronnie Boneau said the shop has a long history in the city.

“It is good to see people be successful and put money back into the community,” he said. “It tickles me. Sure-Shot Game Calls is a historical place here. We have a lot of that here. I think it is really cool. I appreciate that, because it is going to bring back a lot of memories for a lot of people in Groves and the area.”

The Cincinnati Reds drafted Bruce in the first round of the MLB Draft in 2005. Bruce was called up to the Reds in 2008, where he played eight seasons, before being traded to the Mets. Bruce also played for the Braves and Phillies before retiring as New York Yankee.