Jefferson County Commissioners discuss potential precinct changes. See if yours will be affected. 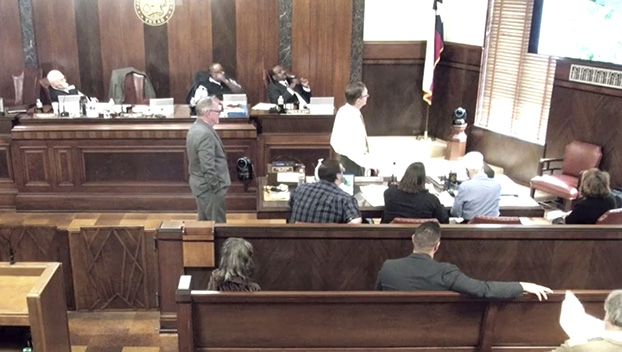 BEAUMONT — Jefferson County commissioners on Thursday will meet with an Austin-based law firm to discuss potential changes to the county’s 109 voting precincts, largely prompted by the change in 2020 Census numbers.

The suggested adjustments were discussed during a Tuesday workshop where County Clerk Theresa Goodness offered changes that would eliminate five of the county’s current 109 voting precincts.

However, current legislation regarding Congressional voting districts could affect some of the proposed changes.

Most of the changes suggested by Goodness and her staff directly relate to Mid and South County.

“We’re just suggesting we combine 97 with 96 and call the whole thing 96,” Goodness said of the area that is boxed in by Savannah Avenue, Texas 73, Memorial Boulevard and Gulfway Drive.

Precinct 101, which is “down in the marshy area of McFaddin National Wildlife Refuge,” has 0 voters. It could be combined with precinct 32, which stretches from Texas 73 to Central Mall Drive, up to FM 365, down Lynwood Lane to Jimmy Johnson Boulevard, and from there down Memorial back to Texas 73.

That would create no change in the number of voters.

If Precinct 103, which runs behind Twin City Highway and Magnolia Avenue and has 20 voters, is combined with 109, which is primarily in the area of Port Neches known as Little Abbeville, it would create one precinct with 293 voters.

Precinct 104, which includes Pleasure Island and a large amount of West Port Arthur, was deemed unsuitable for change.

“We don’t see what we can do with 104,” Goodness said. “There’s not a lot of voters in it. There’s 78 voters in 104, but there’s a conflict with the state house districts. We can’t really move that one because then it starts crossing lines.”

The same applied to precinct 106 on West Port Arthur Road, which has 24 voters.

It was also suggested that precinct 107, where the prison facilities are located, be renumbered to 102.

County Judge Jeff Branick said Tuesday that no action would be taken that day.

“That’s an item that relates to adjustment of the boundaries of voting precincts because of changes to the Congressional districts at the federal level, state representation, state senator as well as commissioner’s court precincts,” he said.

Jefferson County discussions happened the day after the U.S. Department of Justice filed suit against the State of Texas for newly-drawn Congressional and state House maps.

According to information from The Texas Tribune, the lawsuit claims the new maps discriminate against voters of color “by denying Latino and Black voters equal opportunities to participate in the voting process and elect their preferred candidates.”

Branick said commissioners might vote on the matter next week, but will definitely do so before the end of the year.

For a map of all 109 current precincts, go to click here.