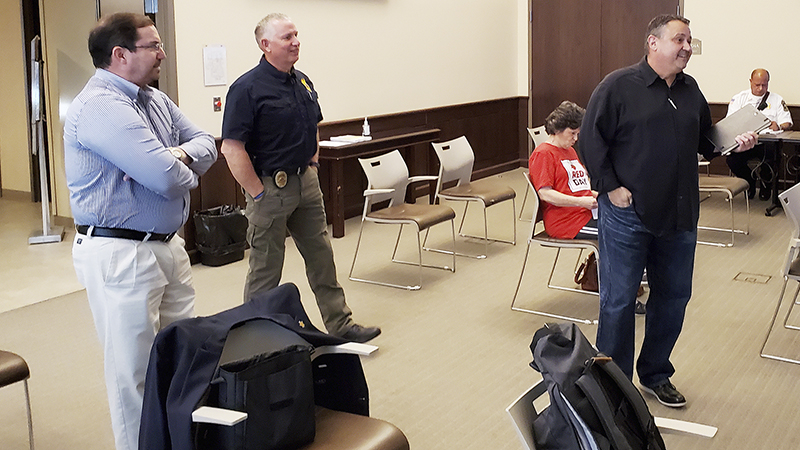 PORT NECHES — A growing population, development along the riverfront and construction of a new school are factors considered when putting together a traffic engineering study in Port Neches.

Eric Dietrich with TEDSI Infrastructure Group Consulting Engineers presented findings and recommendations this week on six key issues of suck in the area bordered by Lee Avenue to the north, Merriman Street to the east, Port Neches Avenue to the south and Block Street on the west.

Dietrich said the problem of vehicle stacking happens on Heisler Street, Jackson Avenue and Block Street when parents are picking up Woodcrest students.

The group placed cameras along these streets to record the process and asked the school about standard procedures for pickup.

The recordings show approximately 108 vehicles turning from Block to Heisler from 2:30 to 3:30 p.m.

In that, approximately half the vehicles are stacking up on Heisler.

Woodcrest will soon be demolished and a larger school constructed, where the normal 300 students would increase to 563, the city council was told Thursday.

Since the new campus won’t be ready until next year and the design would help with the issue of stacking, TEDSI determined no additional improvements are needed at this time, Dietrich said.

The study also examined if a traffic signal is needed at intersections of Port Neches Avenue with Nall and Block.

Specific criteria exists for a traffic signal to be placed, including nine minimum standards. Eight-hour and four-hour vehicular volume was reviewed, and those warrants weren’t satisfied, Dietrich said. This will be reevaluated once development is in place.

The city’s riverfront area is booming with a 99 home subdivision and the addition of Iguana Joe’s restaurant, an unnamed small size restaurant and Neches Point Food Court’s three proposed businesses.

There is also the existing Neches River Wheelhouse at Lee Avenue.

The ranking dropped to an F, meaning extremely low speed, high delay and extensive queing and congestion when looking at the peak hours with the new development.

Ideas for a short-range solution, Dietrich said, could include installing signs along Port Neches Avenue at the intersections with Block Street and Merriman Street. Long-range improvements include improving the geometrics of the Port Neches Avenue/Avenue C at Llano Street intersection, which has an unusual configuration.

TEDSI was also tasked with what to do to discourage the use of Montgomery Street, Marion Street, Dallas Street and Llano Street as access routes to the riverfront.

The study suggests several proposals such as improving and widening Block Street, which is costly; the use of speed humps/bumps, providing a physical barrier at Grigsby Avenue or making these streets dead-end at Lee Avenue.

Widening and restriping Lee Avenue is one of the other recommendations, but, as city leaders pointed out, this would likely require issuing certificates of obligation.

TEDSI recommends widening the whole length of Lee Avenue to a minimum of 20 feet or 24 feet.

For the area of Port Neches Avenue at Montgomery Street, Dietrich spoke of the stopping sight distance. This refers to the amount of space needed to stop before striking another vehicle. The recommendation for this area is adding “bump outs,” which are curb extensions.

Port Neches resident Lori Arceneaux, who lives near the riverfront, expressed concern over the conditions of the roads due to construction of the new subdivision. She wondered if the dump trucks hauling materials have to pay some sort of road use tax. The answer was no.

Mike Dolce, another Port Neches resident, wondered if the traffic counts took into effect golf carts, as many parents drive golf carts to pick up their children from school as well as navigate in-town streets to the riverfront.

Dietrich said yes, they were factored in.

No action was taken on the traffic study, as it was a discussion and presentation.