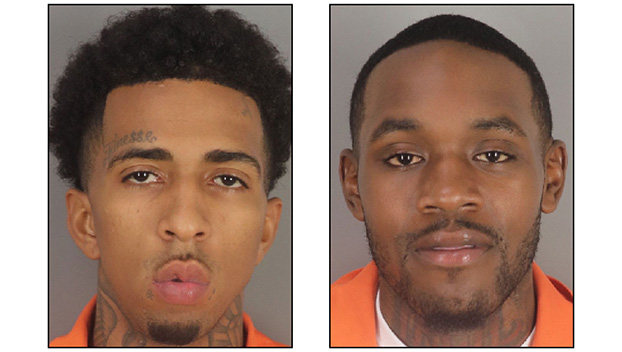 On Monday, members of the Port Arthur Narcotics and Guns Unit conducted a traffic stop in the 1300 block of Augusta Avenue.

The front seat passenger was recognized and identified by officers as Anthony J. Jones, a 24-year-old Port Arthur resident.

It was known that Jones had outstanding county warrants for unlawful possession of a firearm by a felon and a motion to revoke probation for aggravated assault.

The driver of the vehicle was recognized as Aaron R. Augustine, a 28-year-old Port Arthur resident.

Augustine refused to stop and, in his effort to evade officers, crashed within a few blocks of the traffic stop.

At this time, police said the driver and passenger exited and fled on foot.

Several officers responded to the area and after a brief foot chase, two suspects were arrested.

A search of the vehicle revealed two handguns and crack cocaine, according to the PAPD.

Jones was arrested for unlawful possession of a firearm by a felon.

Augustine was arrested for unlawful possession of a firearm by a felon, evading arrest/detention with a motor vehicle and possession of controlled substance.

Jones and Augustine were taken to the Jefferson County Correctional Facility.