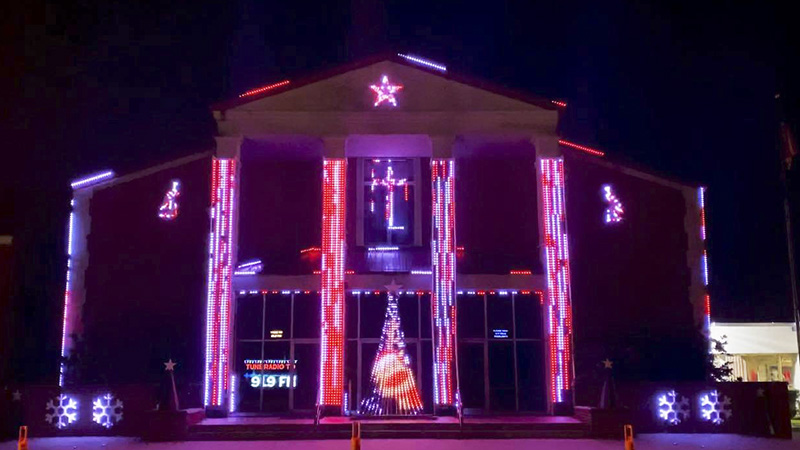 NEDERLAND — It’s hard to miss the giant building that is First Baptist Church Nederland. But if you pass by at night this month, it’ll be pretty much impossible.

Church leaders recently unveiled a large, interactive Christmas light display that synchs to music and serves as a way to bring the community together after a tough two years.

“We really needed a big boost of the Christmas spirit after all that we’ve been through,” said Pastor Jason Burden. “We wanted to be able to bless our community with something extra special, and we were able to do that this year.” 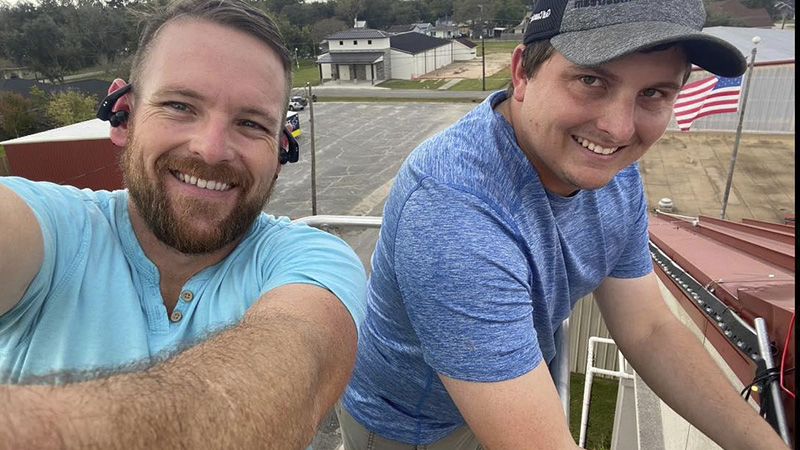 The idea started last Christmas when Youth and Family Pastor Adam VanArsdale and his family were roaming Southeast Texas to look at lights. They stumbled across a home in Bridge City with lights that were synched to music, and families could tune their radio to a certain station to listen along.

And bringing the idea to the building at 1911 Nederland Avenue has been in the works almost since then.

“We actually started with the software side of it and the tutorials back in January,” VanArsdale said of he and his cousin, Caleb Washburn.

“We live in that age where you kind of learn as you go. There were a lot of YouTube tutorials, and Caleb is an engineer. He’s very smart. So we definitely relied very heavily on him and other people in our church that had various backgrounds in networking.”

Although, not many of the church’s 2,000-plus members were aware – even as pieces began arriving and assembly began this summer in the gym.

With more than 7,000 strands of lights, the church debuted the creation to their congregation on the Saturday before Thanksgiving. And beginning Nov. 28, it became a nightly display for all to join in on.

The light display will run from 6-10 p.m. every night through Dec. 31. But weekends will have a little something extra, as groups bring around treats, hot chocolate, etc.

“We recognize the weekends are going to be the most opportune times for people to bring their kids out and just take in a show,” Burden said. “It’s free. And we want to be a blessing to people. It’s really going to help us to get the word out that Christmas starts with Christ. That’s kind of the whole reason for us doing something extravagant like this is. We really want to emphasize the Christ in Christmas. So there’s going to be worship songs. We want to be Christ-like, serving the people that come by.”

The music spans every age group, from toddlers to adults. There’s high-electronic songs that show off the extremes of the light display, and worship songs as well.

Visitors can sit in their vehicles, tune into 91.9 on their radio and listen from inside; or they can join together out in front of the light display in lawn chairs while the children dance around and find joy in the lighted wonderland.

And there’s a rumor, the two pastors said, that Santa and Mrs. Claus might make an appearance or two.

“We will outdo Clark Griswold at some point,” Burden joked.