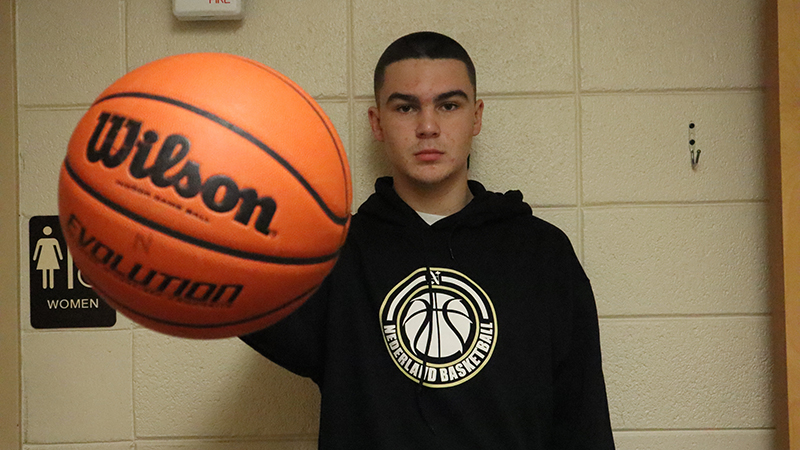 NEDERLAND — Seven weeks ago, Nederland basketball player Tripp Parker was undergoing hip surgery in hopes of being back in time for the start of district play. One month ahead of schedule, Parker played his way back into shape in time for the team’s first scrimmage.

“I was just focused on a speedy recovery,” he said. “I did physical therapy every day. It was painful. There was a lot of pain, and I was in a chair for three days straight.”

Parker said the injury was likely due to overuse, but said there wasn’t a particular event that led to the injury.

The forward’s first time back on the court came in the team’s first scrimmage.

“I hadn’t practiced or anything, yet,” he said. “I was doing walk through drills and doing things at half speed for about a week. I practiced before our first game and didn’t get many minutes. I was so sore after the game. It was my whole body. It wasn’t just my legs.”

Prior to the surgery, Parker was the team’s leading scorer in spring and summer ball. Nederland Head Coach Brian English said Parker is still working on getting back to leading the team.

“He is doing a good job,” English said. “He is back a month earlier than he was supposed to be. He is trying to get it back. He has tremendous work ethic and is getting better every day.”

English said Parker leads the team even when he is not 100 percent.

“He has shown some toughness, that is for sure,” he said of the senior. “He was dead set on getting back for the scrimmage and did that. Hopefully, everyone saw that and learned from it and, hopefully, we can build on it.”

When not on the court, Parker enjoys his statistics and government classes.

After graduating high school, the senior wants to start his own business.

“I don’t want work a normal job,” he said. “I’m big into crypto currency trading right now, so I want to do something with that.”

Parker owns several types of the crypto currency, which he got into last year.

“I follow it every day,” he said. “For me, it is basketball and that.”

At 6-foot-4, Parker said he was always tall, but hit his growth spurt in ninth grade.

Using his height, Parker’s game is best around the rim.

“My biggest strength is scoring near the basket and rebounding,” he said.

His free throws have also improved. He worked on the shot after his surgery due to not being as mobile. The work paid off as Parker has hit all 12 of his free throws this season.